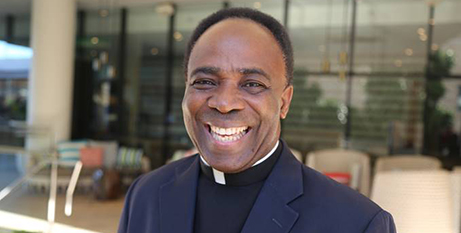 Fr Aniedi Okure, who spoke Tuesday at a national conference in Brisbane on missionary clergy and religious (The Catholic Leader photo)

A major Church conference on missionary clergy and religious in Australia has heard of the demographic shifting of the Catholic Church and the need to welcome and nurture international priests.

“The Church is rich, the Church is vibrant because of its diversity,” Fr Aniedi Okure, a Dominican priest and executive director of the Africa, Faith and Justice Network in Washington, told the sixth national conference on missionary clergy and religious in Australia, being held in Brisbane.

Fr Okure spoke on Tuesday of the experience and challenges for clergy born outside the United States, and trying to fit in to that country’s pastoral life.

He is an instructor at Loyola Marymount University’s Cultural Orientation Program for International Ministers and described the process of “give and take” needed to help an “incoming” priest adjust to a new pastoral community in which he is going to serve.

“Orientation is crucial and should be undertaken as soon as the person arrives. It is to prepare the missionary priest to enter appropriately to the new context,” he said.

Fr Okure said careful orientation ensured that new priests “were not shy and enclosing themselves”, but rather are able to use their experiences and gifts and talents to contribute to enriching and enhancing their ecclesial community.

His orientation approach was now used by US bishops to generate guidelines and conduct pastoral planning.

While accepting that Australia is not identical to the United States, Fr Okure said there are many lessons to learn from the US about welcoming international priests.

“Australia is a country of immigrants, like the United States. The Catholic Church is the largest religious group and a large number of Catholics [were] born outside Australia,” he said.

“The seven-person choir was distinctly Asian… and the congregation was like the United Nations,” he said.

Fr Okure recommended that three months was a minimum time needed for “enculturation” of newly arrived priests in the US to be ready to join a parish community.

He also stressed the role mentors could play in helping international priests adjust and fit in.

During the conference opening, Brisbane Archbishop Mark Coleridge acknowledged the shifting nature of the Catholic Church, increasingly a migrant church – a trend that would increase in the next three decades.

“More and more of the real energy in this Church is found in the immigrant communities,” Archbishop Coleridge said.

“It is dramatically true that the profile of the Catholic clergy and the religious communities have changed very markedly in recent times. It is not just the leadership that is changing; it is the profile of the entire community.

In 2014, the most recent figures available, the largest five groups of international priests coming to Australia came from India, the Philippines, Ireland, Vietnam and Nigeria.

Additionally, 25 per cent of all religious women, religious brothers and clerical religious were born overseas, with the largest groups coming from Ireland, New Zealand, Vietnam and Solomon Islands.