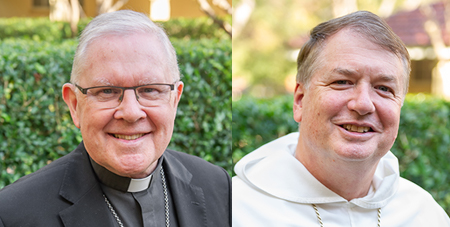 The Catholic bishops of Australia have today elected Archbishop Mark Coleridge of Brisbane to a second two-year term as president of the Australian Catholic Bishops Conference.

Archbishop Coleridge was ordained Auxiliary Bishop of Melbourne in 2002 and later became Archbishop of Canberra-Goulburn. Since 2012, he has served as Archbishop of Brisbane.

He was elected president of the Conference at its plenary meeting in May 2018 after previously serving as its vice-president for two years.

Sydney Archbishop Anthony Fisher OP was re-elected Conference vice-president, a role he also took on in May 2018.

“Archbishop Fisher and I have worked very closely over the past two years and I’m grateful that the bishops have backed our ongoing partnership,” Archbishop Coleridge said.

“As a Conference, we have faced a number of big challenges over the past two years, including preparing for the Plenary Council and considering how the People of God in Australia can walk together into the future, especially now in the wake of the COVID-19 crisis.

“The Church’s implementation of policies and protocols that prioritise child safety and offer a just and compassionate response to victims and survivors of abuse has also been a crucial focus.

“Much has been done and the bishops will consider further steps during our plenary meeting over the next few days.”

Archbishop Fisher also cited the benefit of continuity at a pivotal time in the Church’s history, saying “when we have medium- and long-term initiatives to carry out, it’s good to have settled leaders supported by a group of bishops with shared aspirations”.

Archbishop Peter A. Comensoli of Melbourne and Port Pirie Bishop Greg O’Kelly SJ, elected in May 2019, are continuing members of the Permanent Committee.