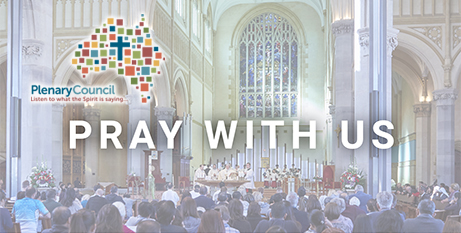 Plenary Council president Archbishop Timothy Costelloe SDB is inviting Catholics across Australia to pray with and pray for Council members during the upcoming first general assembly.

The Fifth Plenary Council of Australia will open on Sunday, October 3, with Archbishop Costelloe celebrating the opening Mass at St Mary’s Cathedral in Perth at 2pm AEDT. The Mass will be livestreamed on the Plenary Council website.

Masses during the week will also be broadcast publicly at 9.30am AEDT, with the Mass to close the first general assembly livestreamed from Brisbane at 11am AEDT on October 10. Australian Catholic Bishops Conference president Archbishop Mark Coleridge will celebrate that Mass.

Archbishop Costelloe said the Masses being celebrated online allow people across the country to join in common prayer and worship with the Plenary Council as its focus.

“With millions of people living in locations where public Masses can’t be celebrated, this online option will help Council members and the wider faithful unite in liturgy,” he said.

“Where people can gather for Mass, the same prayers, readings and musical suggestions used for the Plenary Council Masses can be downloaded for use in each parish across the country.”

The prayers provided to members for their nourishment, including a range of prayer experiences such as lectio divina and the Examen, are also available for download and use.

“This historic moment is a time for deep prayer and discernment, and we are inviting everyone to play their part in praying for the Council and praying for and with the members, who have a particular role during the Council’s celebration,” Archbishop Costelloe said.

In addition to the Masses, opening prayer for each day of the first general assembly will be livestreamed, offering another time of shared encounter for those wishing to join online.

Sr Kerry Willison RSM, the chair of the Plenary Council’s national liturgy committee, said the various prayer experiences and Mass settings draw on the rich local and universal traditions of the Catholic Church.

“During the entire Plenary Council journey, we have been led by the Holy Spirit, and so a special Mass of the Holy Spirit will open the first general assembly,” she said.

“With the feasts of St Francis and Our Lady of the Rosary, there are special focal points during the week, as well as prayers and readings chosen specifically for this purpose.

“The Masses and prayer moments will be full of symbolism. We look forward to having the 280 members of the Council sensing the prayers of others being added to theirs, surrounding them and giving them strength.”

Click here to access the prayer and liturgy resources for the Plenary Council, including for the first general assembly.