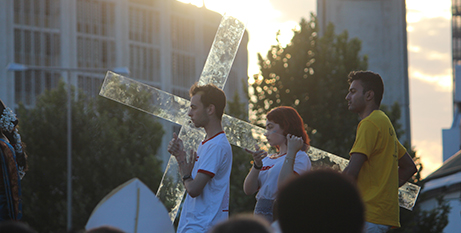 An open-air Mass at Trinity College in East Perth was the culmination of the three-day Festival, which attracted 5500 young people from across the country. It was the largest Catholic event ever held in Western Australia.

In his homily at the Mass, which also drew members of the wider Perth Catholic community, Archbishop Costelloe reflected on the number of questions Jesus asks – and is asked – in the Gospels.

In particular, he reflected on the question from someone introduced in the Bible as a rich young man. In the Gospels, the man asks Jesus: “Master, what must I do to inherit eternal life?”

Archbishop Costelloe reminded pilgrims that the young man could respond affirmatively to the requirement of having obeyed the commandments, but was more challenged by Jesus’ invitation to “sell all you own and give the money to the poor and then come and follow me”.

”What a challenge this young man is presented with. What an opportunity for generosity and for heroism,” Archbishop Costelloe said.

“But then comes what I think is one of the saddest sentences in the Gospels: ‘When the young man heard these words, he turned away and went away sad because he was a person of great wealth’.”

While the rest of the man’s story is not told in the Gospels, Archbishop Costelloe said the question is one all Christians are called to consider and pray about.

“There are so many answers to the question ‘Lord what must I do?’ The answer Jesus gives to you will depend on your own personal circumstances and also on what it is that you are holding close to your heart, but which is preventing you from being the person God has created you to be,” Archbishop Costelloe said.

“Don’t walk away sad from Jesus: he is our Way, he is our Truth, he is our Life. He is alive, he is here with us, he’s calling to each one of us. So tonight, take the chance, take your courage in both hands, and open your hearts and your lives to him.”

At the end of the closing Mass, Archbishop Costelloe announced that the next Australian Catholic Youth Festival will take place in December 2021, with the bishops planning to host the event in regional Australia.

“Having been to four of our five major capital cities, next time we’re going to try and host ACYF in one of our rural centres,” he said.

“All I can say is stay tuned and start preparing already and look forward to the announcement hopefully early in the new year on where the next ACYF will be held.”

Bishop Columba Macbeth-Green OSPPE, the Delegate for Youth for the Australian Catholic Bishops Conference, said the Perth Festival had been a great advertisement for the vibrancy of the Catholic Church in Australia.

“It has been a privilege to be part of this remarkable experience, which has demonstrated the rich tapestry that is the Church in Australia,” he said.

“I have met hundreds and hundreds of young people who are enthusiastic about following Christ and our hope is that energy will be taken back to communities across the country and shared.”

Bishop Macbeth-Green, himself the head of the country diocese of Wilcannia-Forbes, said the next ACYF will have a different feel, but the central premise will be the same – know God, love God and follow God.

“We do things a bit differently in the bush, but hospitality and welcome are in our DNA. We look forward to displaying that in a couple of years time,” he said.

Other highlights of the final day of the 2019 Festival included:

• Musical performances and presentations from Fr Rob Galea, Gen Bryant, Josh Angrisano and a number of other bands;
• Fr Chris Ryan MGL speaking about how to engage with people who have no faith;
• A session on asylum-seekers and refugees looking at “Myths, Mission and Mercy”;
• Sessions introducing delegates to a number of prayer forms, including Lectio Divina, the Angelus and praying about vocation and discernment;
• A four-kilometre pilgrimage walk from the Perth Convention and Exhibition Centre to Trinity College for the final Mass.