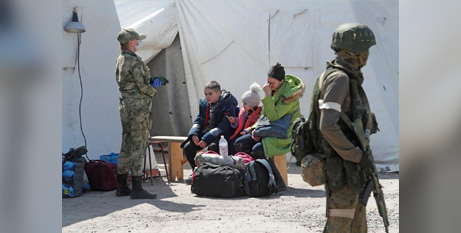 A woman sits with children as evacuees, including civilians who left the area near Azovstal steel plant in Mariupol, arrive at a temporary accommodation center in Bezimenne, Ukraine, May 1, 2022. (CNS photo/Alexander Ermochenko, Reuters)

Australia’s Catholic bishops have again expressed their prayer for and solidarity with the Ukrainian people, in a letter to Major Archbishop Sviatoslav Shevchuk of the Ukrainian Greek Catholic Church.

Australian Catholic Bishops Conference president Archbishop Mark Coleridge told Archbishop Shevchuk that the Church is Australia is watching on with horror at “the tragic situation in Ukraine where an invasion based on lies and injustice continues with no end in sight”.

“The current invasion of Ukraine also takes its place within a larger geopolitical context,” Archbishop Coleridge wrote, calling it “not just a local conflict in a distant land”.

“It has grave implications for Europe and for the entire world, even for Australia,” he said.

“It is a battle not just for democracy against autocracy, but for freedom against slavery, for truth against falsehood, for life against death, for good against evil. In such a battle the Church cannot remain neutral, which is why we write to you now to express our unqualified solidarity with you and your people.”

During the bishops’ biannual plenary meeting this month, Bishop Mykola Bychok CSsR, Eparch of the Ukrainian Catholic Church in Australia, provided an update on the historical and present context in his homeland.

He spoke of efforts over hundreds of years to dominate, subdue and even eliminate Ukraine.

“This war is against the very right of the Ukrainian people to their history, language, culture, Church, to their independent state and ultimately to their existence,” Bishop Bychok said.

“Russia is trying to intimidate us with their cruise missiles, bombs and artillery shells. They are trying to drive us into hiding so that everyone forgets about us.

“But it is in those cellars and bunkers, a miracle takes place – common prayer, sacrificial help to one’s neighbour, indomitable spirit and manifestation of the power of God’s presence.”

Bishop Bychok said the power of prayer has been spoken of by the soldiers defending Ukraine.

“They feel uplifted by God in this war. The soldiers asked us not to stop praying,” he said.

“Moreover, they said that this evil force could not be defeated only in a military way, but rather, in a spiritual way through sincere prayer and repentance.”

Bishop Bychok asked the bishops to again express their closeness to the people of Ukraine. The letter to Archbishop Shevchuk follows the joint statement Archbishop Coleridge and Bishop Bychok made in February.

“Our heartfelt prayer is that the Mother of God will protect Ukraine now as in the past and that the power of her Risen Son will surround the Ukrainian people to crush the powers of darkness that now threaten, so that truth, freedom and life may have the victory,” Archbishop Coleridge said in concluding this week’s letter.