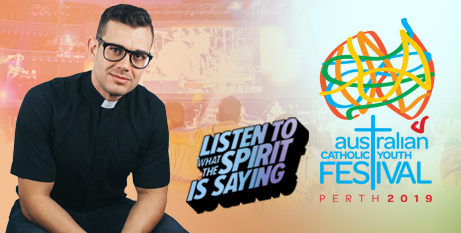 The theme song for the largest gathering of young Catholics in Australia – the Australian Catholic Youth Festival – has just been released.

With up to 5000 young Catholics expected to converge on Perth’s Convention and Exhibition Centre from December 8 to 10, Fr Rob Galea, founder of FRG Ministry and a priest of the Diocese of Sandhurst, has created a new theme song and video clip for ACYF19.

The song title is drawn from the theme for ACYF19 and Plenary Council 2020: “Listen to what the Spirit is saying” (Rev 2:7).

Fr Galea, who has a worldwide following for FRG Ministry using song and sound to evangelise, said the festival’s theme song was written in collaboration with Gary and Bradley Pinto.

“This song is about a person walking different parts of life listening to the Spirit of God in the broken and the suffering. But even in these moments of brokenness and insecurity, God speaks and God uses these moments in our lives for good. And this is what listening is about; even in this pain, God speaks.”

Malcolm Hart, director of the Australian Catholic Bishops Conference’s Office for Youth, said: “We commissioned Fr Rob to create a reflective song to draw young people into a connection with the Holy Spirit, in light of the Plenary Council and ACYF theme.

“Fr Rob has developed a song which is a dynamic invitation to young people to open their hearts and minds to the Holy Spirit. The song can be performed as an epic encounter in a large gatherings, while also able to be prayed in an intimate, repetitive mantra.”

More than 4500 young people, aged between 14 and 30, along with support staff, volunteers and 32 Australian bishops, will attend this year’s festival.

ACYF19 will conclude with a closing Mass at Trinity College Oval, in the heart of Perth.

“We’re inviting the broader community into the gathering for Mass with Fr Rob as the main singer during Mass, where he will perform his song,” Mr Hart said.

“There is much interest and real excitement building throughout the Church in Australia. A lot of people want to get involved and be part of ACYF19, which is very exciting.”

The ACYF19 song and associated resources are now live and available for download on the festival website.