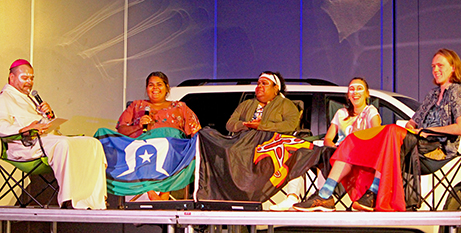 American speaker, evangelist and author Katie Prejean McGrady has told 5500 young Australian Catholics that they are made “not only for something great” in this world, but that they are ultimately made “to worship God for eternity”.

Mrs McGrady was addressing the evening plenary session on the second day of the 2019 Australian Catholic Youth Festival, which will conclude in Perth on Tuesday evening.

She said her long flight from the United States allowed her ample time to think about what she might tell young people gathered for the largest event in the Church’s history in Western Australia.

“You are truly made for not only something great, you’re not only made to make an impact in this world, but ultimately you are made to have a seat in the heavenly kingdom, you are made to worship God for eternity,” she said.

“You, as a young person in Australia in 2019, are uniquely suited to be a witness and a voice to the goodness of God and the joy of the Gospel. You are the ones – I’m convinced of this deeply – you are the ones that can change the world.”

Mrs McGrady’s remarks came at the end of a day during which the call of God, in the person of the Holy Spirit, was a constant theme.

In the morning plenary session, Fr Chris Ryan and Sr Bernadette Toohey from the Missionaries of God’s Love spoke about the ways in which people can listen – and be responsive – to the promptings of the Spirit.

Fr Ryan and Sr Bernadette spoke of four steps along that pathway: Silence, to listen to God; Being open to signs from God; Starting down a path of vocation; and Surrendering to God’s will.

Sr Bernadette spoke of the challenge of hearing the voice of the Spirit in what can be a noisy world.

“There might even be a little voice in your head saying ‘you can’t do that’, ‘you’re not good enough to do that’,” she explained.

Fr Ryan, who has written several books, said he would never have become a priest if he hadn’t chosen to “surrender” to the will of God.

“Our plans and our agendas can sometimes get in the way of really saying ‘yes’ to what God wants for us. To be able to say ‘yes God, I want to do whatever you want’,” he said.

“What I came to, after a long time of wrestling, was simply this: I got to the point where, ‘Lord I don’t mind any more. And in fact, I don’t even care. I just want what you want.’

“That was a game-changer, that prayer of surrender, because I was finally at the point where I could say ‘I just want what God wants’.”

Fr Ryan encouraged the Festival delegates to also say “yes” to whatever God might be calling them to, inviting the three days to be a time of surrender.

• Delegate for Youth Bishop Columba Macbeth-Green host a conversation with young Aboriginal and Torres Strait Islander Catholics about their faith, culture and life;
• The celebration of the Missa Terra Sancti Spiritu – the Mass of the Land of the Holy Spirit;
• A talk from Hobart Archbishop Julian Porteous on how young people can invite their friends to follow Christ;
• Talks from Melinda Tankard Reist on the negative impact of pornography and the sexualisation of young people;
• A presentation by young leader Grace Forrest on the evil and prevalence of modern slavery, calling on young people to be agents for change.

The Festival’s closing Mass will be celebrated on Tuesday evening at Trinity College in East Perth, after a pilgrimage walk from the Perth Convention and Exhibition Centre and a series of musical performances.

The Mass at 6.30pm is open to the wider Perth Catholic community.

For more information about the Festival, go to www.acyf.org.au