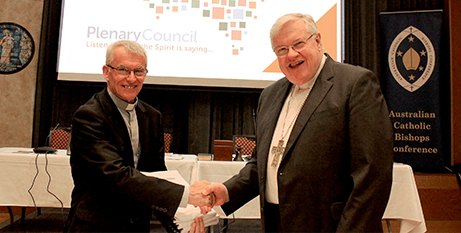 The Australian Catholic Bishops Conference has formally approved the acts and decrees of the Fifth Plenary Council, which will now be sent to the Apostolic See for review.

The documents, which comprise five volumes across hundreds of pages, were received at the Bishops Conference’s plenary meeting last week.

As the acts and decrees were received, the bishops sang the Te Deum, acknowledging the solemnity of the moment in the life of the Church in Australia.

“It was quite a poignant moment as we sensed – once again – the significance of the Council in the life of the Church in Australia,” said Bishops Conference president Archbishop Timothy Costelloe SDB, who also served as president of the Plenary Council.

“In fact, my recent trip to Rome underlined how closely the Church around the world was watching the Plenary Council and how aspects of it are being lived out through the global Synod for a Synodal Church.”

The decrees are available on the Plenary Council website, where they were published after the Council’s second assembly.

“What we have sent to Rome is what emerged from the two assemblies, but also what was uncovered during the earlier stages of our journey,” Archbishop Costelloe said.

“They are, in many ways, a capturing of – as Gaudium et Spes proposed from the Second Vatican Council – ‘the joys and the hopes, the griefs and the anxieties’ of the People of God.”

Plenary Council vice-president Bishop Shane Mackinlay said the work of implementation – the Council’s third and final stage – will be critical.

“There might have been a deeper sense of excitement during the period of preparation and certainly through the time of the Council’s celebration, but it will be in the implementation that the fruits of these years will be seen,” he said.

“While the terms of reference and a means to review the ongoing rollout of the Council’s decisions are important, we have already seen local churches embracing the Council’s outcomes and the commitment to listening, dialogue and discernment embed itself.”

The implementation phase will see oversight and coordination for each decree of the Plenary Council entrusted to at least one of the Bishops Conference’s commissions.

Those commissions will provide reports to the May 2023 plenary meeting of the Bishops Conference. Another review will be undertaken in 2025, with a final review report to be published in 2027.

The terms of reference for the implementation phase of the Council have been published on the Plenary Council website: www.plenarycouncil.catholic.org.au