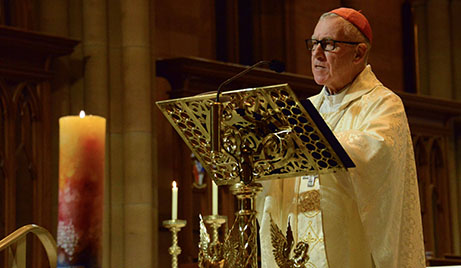 Those gathered for the Fifth Plenary Council of Australia are following in the footsteps of the early Christians, Cardinal John Dew said at Mass on Thursday evening.

The Archbishop of Wellington, one of the observers at the Plenary Council, was the homilist for Mass celebrated on the memorial of Blessed Peter To Rot, Papua New Guinea’s first Blessed.

In his homily, Cardinal Dew spoke about the faith and devotion to Blessed Peter, a lay catechist and martyr who suffered persecution during the Second World War.

In spite of everything, Blessed Peter knew that “with God on our side, nothing can be against us”, he said.

Citing St Paul’s Letter to the Romans, Cardinal Dew said to know the love of God is to have the unshakeable conviction that “nothing can come between us and the love of God made visible in Christ Jesus our Lord”.

In gathering as a Plenary Council, Cardinal Dew said the Members are taking their cue from the early Christian community, who “gathered under the leadership of the Holy Spirit” to discern “how they were to live faithful to the experience of Jesus”.

Discernment is “integral to synodality”, he said, and what the Members are discerning is a future where everyone else has the opportunity “to approach the mystery of God”.

“When we know, when we know deep in our hearts that every hair on our heads has been counted,” he said, then “we know that there is no need to be afraid and that we are worth more than hundreds of sparrows.”

During the day, the Members discerned and voted upon more motions from the Motions and Amendments document. The details were published on the Plenary Council website on Thursday evening.

On Friday, work will continue on Part 5, “Communion in Grace: Sacrament to the World” and also take in Part 6, “Formation and Leadership for Mission and Ministry”.

Revised text for Part 4, “Witnessing to the Equal Dignity of Women and Men”, will also be considered. The text was published online on Thursday evening.

Mass on Friday will be livestreamed from 7.45am AEST, with Friday’s opening session also to be shown online from 9am.