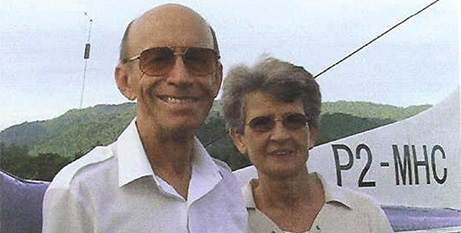 Kevin Shorthouse, 79, a former Catholic Mission pilot and teacher, and his wife Gail, 76, were pleasantly surprised on Monday to receive the Order of Australia Medal for their service to the people of Papua New Guinea.

Monday’s announcement follows earlier awards and recognition from Pope Benedict XVI in 2005, who made the couple a Knight and Dame of the Order of Saint Sylvester, and their appointment by the Papua New Guinean Government in 2009 as Officers of the Order of Logohu.

Over their decades of service for Catholic Mission in PNG, the couple has assisted countless people in need by transporting the seriously ill in medical emergencies and by supplying remote villages with medical goods and educational supplies – often flying in dangerous weather conditions and working in very remote locations.

“DOVAIR brought us both joy over the years and, although challenging, it was very rewarding. We knew that we were helping people who needed our support,” Mrs Shorthouse said.

“In the villages there is very little access to health care, so our air service played a vital role in delivering medical supplies to the health centres and medical staff to assist people in need.

“We also played a pivotal role in delivering educational supplies and getting teachers into very remote areas of PNG to teach children who would otherwise not receive an education.”

Mrs Shorthouse said coordinating the placement of religious personnel throughout the region was very important, allowing the religious to assist people living in the mission stations and surrounding areas.

The couple served at the Aitape Franciscan Mission and at the SVD Madang Mission. They spent their last 10 years at Vanimo Catholic Mission, near the Indonesian border.

“There was never a dull moment and we thoroughly enjoyed our time working alongside the people of PNG. They were very appreciative of the services we were able to provide for them,” Mrs Shorthouse said.

“We ran the Mission Service in Vanimo for 10 years … Kevin was the pilot but the work demanded that he wear many hats. I was managing the administrative work and coordinating the ground staff,” she explained.

“Overall, it was very challenging, especially the risks associated with flying light aircraft in remote areas of PNG. We both thank God that we got through it okay.”

The couple, who have been married for 53 years and have raised five children (four girls and one son) and have 14 grandchildren, are thankful for the support they received from family.

“Our experiences in voluntary work have brought us closer together as a family, and PNG has a special place in all our hearts,” Mrs Shorthouse said.