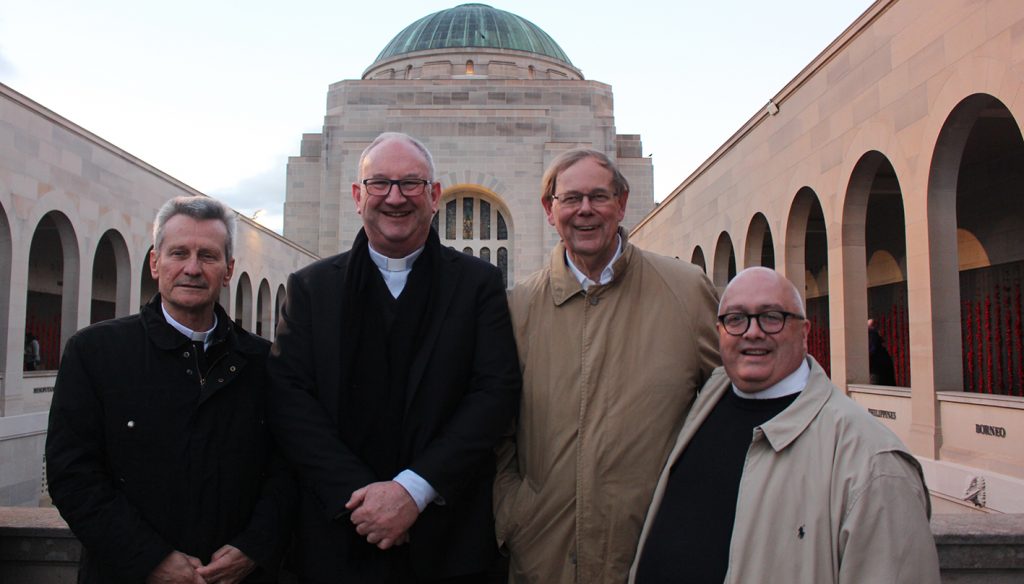 General secretaries of the bishops conferences of France, Australia, Germany and England and Wales at the Australian War Memorial in Canberra

The general secretaries of the bishops conferences of England and Wales, Germany and France have completed a three-day visit to Canberra that examined key issues facing the Church in Australia and globally.

Fr Stephen Hackett MSC, general secretary of the Australian Catholic Bishops Conference, said he was “delighted” to host the “very beneficial” gathering, which moves from country to country each year. He said while the Church in Australia – and in the Oceania region – is somewhat isolated from the rest of the world, many of the experiences are shared.

“I find it very reassuring that every time we meet, in different ways we’re facing many of the same issues,” Fr Hackett said, while acknowledging that some of those issues have arisen at different times in the various countries.

“It’s good to get the different perspectives on how we respond to the issues that concern us at this time.”

Among the key topics for discussion were the Plenary Council 2020 and the Church’s response to the Royal Commission into Institutional Responses to Child Sexual Abuse.

Fr Christopher Thomas, general secretary of the Bishops’ Conference of England and Wales, said while the Church in those countries can be “a bit parochial”, learning about the various “joys and difficulties” in other contexts around the world is important.

“The Plenary Council is a bold step because it’s most definitely not a top-down approach. It’s a listening and discerning exercise which I think the Church, under the leadership of Pope Francis, is certainly being encouraged to take,” he said.

Fr Thomas said another of the fruitful discussions that took place during the meeting of general secretaries was on the Royal Commission and the Church’s response to the Commission and its recommendations.

He said the lessons learned in Australia can help the Church in England and Wales respond effectively to the abuse crisis and to local investigations and scrutiny.

Germany’s Fr Hans Langendorfer SJ, who has attended a number of meetings of general secretaries, said the gatherings are filled with energy and provide insights into the Church and its mission in various countries.

He said the Church in Germany has suffered a loss in credibility and in its reputation, but a process similar to the Plenary Council could help the Church there respond to those challenges.

He and other Church leaders in Germany will closely watch how the Council unfolds in Australia, Fr Langendorfer said.

Fr Thierry Magnin, from the French bishops conference, said as someone who took up his role fairly recently, it was a “very good experience” to share with his international colleagues the mission he has undertaken.

He too was “very impressed” by the way the Church in Australia has embraced the concept of synodality, saying the Plenary Council provides an example for how the Church can better engage with the faithful.