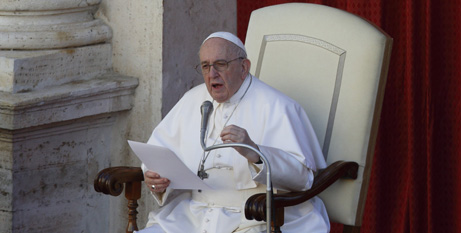 Pope Francis speaks during his general audience in the San Damaso Courtyard of the Apostolic Palace at the Vatican May 26, 2021. (CNS photo/Paul Haring)

A leading Australian canon lawyer says revisions to Church law announced this week clarify the nature of certain canonical crimes and seek to ensure they are dealt with in an effective way.

Pope Francis issued the apostolic constitution Pascite Gregem Dei on June 1, reforming Book VI of the Code of Canon Law, which deals with individual crimes. The changes have been many years in the making, and revise parts of the Code published in 1983.

Rodger Austin, a member of the executive committee of the Canon Law Society of Australia and New Zealand and the Society’s editorial board chair, said Pope Francis’ revisions will strengthen the application of canonical penalties, when necessary.

“Pope Francis recalled the need the Church has for a penal system of law to address the restoration of the demands of justice, the amendment of the offender and the reparation of scandals which damage the faith and life of the people of God,” Dr Austin said.

Among the changes in the area of sexual abuse are the extension of abuse beyond minors to include “a person who habitually has an imperfect use of reason or one to whom the law recognises equal protection” to that of minors.

There is also a broadening of penalties to include lay people who hold key roles within the Church. The revisions include “grooming”, a practice used by some abusers to increase access to children, and possessing child pornography as crimes.

Dr Austin said one of the key amendments relates to the balancing of justice and mercy, with a recognition that there may have been too much leniency in recent decades.

“The reluctance in the past to impose punishment on offenders must be replaced by an understanding ‘on the part of the pastors and the superiors, it is necessary to apply the penalties’,” he said, quoting part of the apostolic constitution.

“Pope Francis is saying that while bishops and major superiors should do what they can to rehabilitate people under their care, sometimes you cannot and must not avoid imposing penalties.”

Dr Austin said the location of crimes against minors and other people who are vulnerable in the new section of “Offences Against Human Life, Dignity and Liberty” is a significant change.

“That amendment highlights the seriousness of these crimes, giving them their own place within the Church’s legal system,” he said.

In addition to the changes with regard to sexual abuse, the revisions also address areas of financial impropriety, misuse or abuse of sacraments and negligent administration.

Dr Austin said canon law will continue to evolve, responding to changes within and beyond the Catholic Church. He also said that as with any law – civil or canonical – its effectiveness will be measured based on its implementation.

“The challenge for bishops and superiors is to acquire a knowledge of the law and how it is to be applied,” he said.

“In like manner, the task for canon lawyers is to undertake an in-depth study of the new law taking account of the development of the new law from its beginnings, which are found not only in legal texts of the 1983 Code of Canon Law but the teaching of the recent popes.”

The new provisions will come into force on December 8 this year.