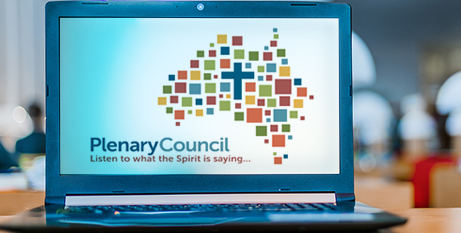 People across Australia and beyond will be able to follow the progress of the Fifth Plenary Council of Australia through Masses and livestream sessions when the first general assembly opens this weekend.

The Plenary Council, the first such event in Australia since 1937, will open with Mass livestreamed from St Mary’s Cathedral in Perth on Sunday, October 3. Plenary Council president Archbishop Timothy Costelloe SDB will celebrate that Mass at 2pm AEDT and officially open the nine-month journey of the two Council assemblies.

Masses will be broadcast at 9.30am AEDT each of the six days of the Council program, with Australian Catholic Bishops Conference president Archbishop Mark Coleridge celebrating the Mass to conclude the first assembly at 11am AEDT on Sunday, October 10.

“Across our vast continent, people will be able to gather in prayer and worship to share in this journey of discernment,” Archbishop Costelloe said.

The Masses, which can be viewed on the Plenary Council’s website, are designed specifically for those – Council members and the wider community – who are unable to gather for Mass in their local place.

Where local health and government restrictions allow public Masses to be celebrated, the same Mass being celebrated for the Plenary Council, including prayers, readings and musical suggestions, can be used.

“We know that gathering in person for worship is everyone’s first choice, but we wanted to ensure that those who can’t come together can share in the liturgical life of the Plenary Council,” Archbishop Costelloe explained.

Starting with the opening plenary session on Monday, October 4, parts of the morning session at which all 278 Plenary Council members gather online will be livestreamed. The livestream will open at 11am AEDT each day and run for about 75 minutes, except on Thursday, October 7 – a day when most of program will be offline.

“Across the six days of the first assembly, the members will be praying with the 16 questions of the agenda and engaging in the practice of spiritual conversations. We know that some parishes and families and other Church communities are planning to do the same.”

Ms Turvey-Collins said the national reach of the Plenary Council journey’s period of preparation, dating back to March 2018, can and should continue during the nine-month period of the Council’s celebration.

“We invite everyone to find ways to pray for and engage with the discernment of the Plenary Council as the members look to develop concrete proposals to create a more missionary, Christ-centred Church,” she said.

The morning livestream each day will feature Auslan interpreting for members of the deaf and hard of hearing communities.

Find out more at www.plenarycouncil.catholic.org.au

See the program for the first general assembly below or on the Plenary Council website. 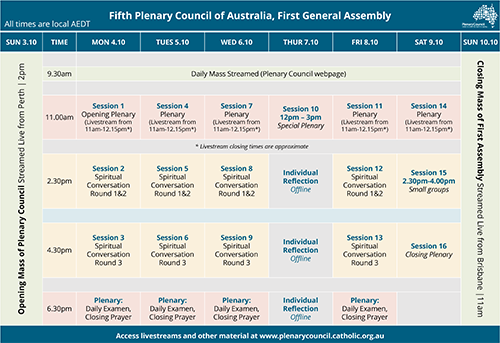