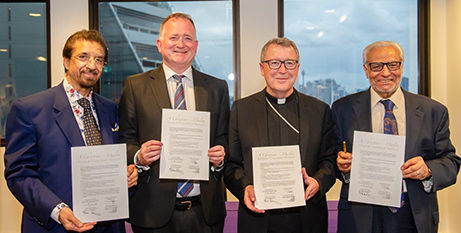 The anniversary was marked at an event at Australian Catholic University’s North Sydney campus on Tuesday evening attended by dozens of people from the two faith traditions.

Archbishop Adolfo Tito Yllana, the apostolic nuncio to Australia, and Bishop Michael McKenna, chair of the Bishops Commission for Christian Unity and Inter-religious Dialogue, were among the Catholic leaders at the event, along with Melkite Bishop Robert Rabbat, Chaldean Archbishop Amel Nona and Sydney Auxiliary Bishop Terry Brady.

A representative of the embassy of the United Arab Emirates, where the Document on Human Fraternity was signed in February 2019, was on hand. Members of other faith communities were also at the event.

The Australian document – signed by Bishop McKenna, ACU deputy vice-chancellor Professor Hayden Ramsay on behalf of the Catholic Church – upholds, recognises and commits to a number of values.

It upholds the concept of citizenship and the “capacity of every person to pursue the good and the true, through the exercise of the freedom of belief, thought expression and action”.

It recognises all human beings, “as children of God by divine grace”, as brothers and sisters. It recognises the role of religions in achieving and maintaining peace in the world, the contributions religions make and the equality of dignity of all people, regardless of age, sex or race.

It commits to fraternity between believers, non-believers and people of good will and to the rejection of violence, hate, extremism and “the shedding of blood throughout the world”. The leaders also committed to making the Document on Human Fraternity an object of research and reflection in learning environments.

Archbishop Yllana said the document signed in February 2019 was “rich in content as well as in significance” and has a relevance for all people of good will.

“The Document on Human Fraternity represents a milestone on the path to inter-religious dialogue,” he said.

“It aims to contribute positively to building a world founded on peace and justice with all peoples recognising each other as brothers and sisters, precisely because every person has his or her origin in the creating love and power of the same God.”

Bishop McKenna said people of faith are being marginalised in a number of contexts and a shared effort to safeguard their rights to belief and expression is critical.

“It is important for us to understand how deeply we people who believe in God need to understand and support one another in the face of forces which would seek to banish religion altogether,” he said.

“I hope [signing the Interfaith Commitment Statement] will be another small step in setting up the way to put into practice the fine words of this document, which we celebrate today.”

Dr Mohammed, in words translated at the event, spoke of how the Australian document has the potential to combat the extremism that “destroys our people and our lands”.

“We are here to emphasise that Muslims and Catholics in Australia, among other faiths, have a common cause in agreeing to the principles established in the covenant for peaceful coexistence,” he said.

“Perhaps it is through this covenant that the conflict between extreme groups on both sides of the world in the West and in the East will be weakened.”