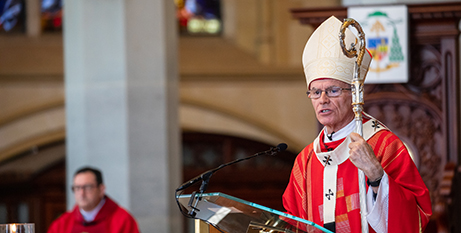 As Archbishop Timothy Costelloe SDB opened the Fifth Plenary Council of Australia, he said Catholics “must become, even more than we are already, a community of true disciples”.

The Plenary Council, the first such gathering in Australia since 1937, is being celebrated across nine months, bookended by assemblies from October 3-10 and in July 2022.

Archbishop Costelloe, the president of the Plenary Council, celebrated the opening Mass at Perth’s St Mary’s Cathedral on Sunday morning. It comes after three-and-a-half years of preparation, including a significant period of national consultation.

That consultation focused on the question: “What do you think God is asking of us in Australia at this time?”

That question was one that Archbishop Costelloe explored in his homily, before offering a possible answer.

“Perhaps the most important thing God is asking of us at this time is to return the Church to Christ and return Christ to the Church,” he said.

“What has always been true in theory and in principle urgently needs to become true in the day-to-day experience of everyone who encounters us. We must become, even more than we are already, a community of true disciples.

“We must become a living icon of Christ who humbled himself, taking the form of a servant. We must learn from the One who is meek and humble of heart. We are being sent by Him as He was sent by his Father.

“If we remain in Him, as branches remain part of the vine, we will bear much fruit.”

The 278 members of the Plenary Council, made up of bishops, priests, members of religious orders and lay people, will meet online over six days, starting tomorrow.

They are called to “develop concrete proposals to create a more missionary, Christ-centred Church in Australia”. They will contemplate an agenda that contains 16 questions across six themes: Conversion; Prayer; Formation; Structures; Governance; and Institutions.

The Council’s members will engage with the agenda’s questions through listening and dialogue, using the spiritual conversations process widely used in Catholic settings.

Archbishop Costelloe said in today’s homily: “The Lord is inviting us to reflect deeply and courageously on how we can better, as individuals and as communities of faith, be this living image of the life-giving God who, in Christ, is always seeking to be present and active in our world.”

Find out more at www.plenarycouncil.catholic.org.au

The Mass to close the first general assembly will be celebrated at 10am AEST on Sunday, October 10, and livestreamed from St Stephen’s Cathedral in Brisbane.

The second assembly is scheduled to take place in Sydney from July 4-9, 2022.