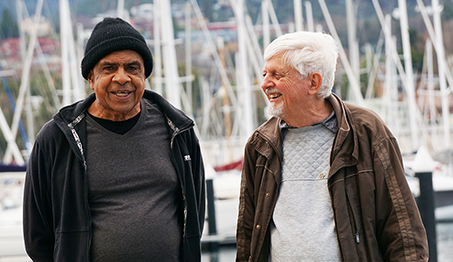 Preserving and promoting the languages of Australia’s First Peoples has been at the heart of the ministry of a New South Wales Christian Brother recently recognised with Australia’s premier award in teaching languages other than English.

In Australia, of the estimated original 250 Aboriginal and Torres Strait Islander languages, only around 120 are still spoken. Of these, approximately 90 per cent are considered endangered.

Br Steve, from Woolgoolga, has worked at the request of local Aboriginal elders for the past 30 years to help write a dictionary and teach the local language for the Gumbaynggirr people.

The 76-year-old teacher and linguist yesterday said he felt greatly honoured to receive the award, but the honour was one he shared with the local Aboriginal elders and community, which had shown great pride and ownership over their heritage.

In addition to spending years working closely with the elders to compile a dictionary and grammar of Gumbaynggirr, Br Stephen has also co-developed courses up to Certificate IV level, and co-edited the Gumbaynggirr Yuludarla Jandaygam Gumbaynggirr Dreaming Story Collection.

“The elders in Kempsey in 1986 wanted me to help them get back some of their cultural language and knowledge,” said Br Steve, who was born in Hungary and migrated to Australia with his family in 1950.

“I can’t help but have languages in my blood. It’s only in our Anglo-culture that one language is deemed enough,” he said.

“The tragedy of Aboriginal language on the Coast here is that most of the languages have been hurt. This work is really ultimately about pride, identity… I want Aboriginal people to realise their value and part of that value is one’s heritage, one’s sense of place.”

Br Steve currently has two roles in the community in Aboriginal Catholic Ministry, as part of the Lismore Diocese, and teaching Indigenous language specifically through the Muurrbay Aboriginal Language Centre.

Mr Williams said that Br Steve has worked with the community to help its members do justice to the aspirations of those people who first gathered in Kempsey in the 1980s to reclaim the language.

“He has really understood from the start that our language and culture are completely intertwined,” Mr Williams said.

“Developing the language to accommodate the needs of contemporary speakers was only possible because Br Steve has always worked with us as part of a team, together adapting the language in ways that made sense culturally.”

The Patji-Dawes Award recognises outstanding achievements in language teaching by an accomplished practitioner in Australia, whether teaching in primary or secondary school, university, language schools or centres. It is named after Aboriginal woman Patyegarang and First Fleet Lieutenant William Dawes, who shared a student-teacher relationship that saw Dawes master the Eora language in the earliest documented instance of a settler learning an Indigenous language.

The award is co-sponsored by the Australian Federation of Modern Language Teachers Associations and the Languages and Cultures Network for Australian Universities. The winners and their nominators attended a conferring ceremony at the 22st AFMLTA International Languages Conference in Hobart on July 9.