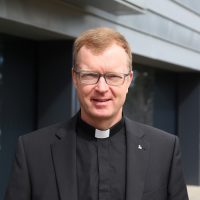 The Catholic Church in Australia is among the top five countries worldwide in adopting processes to safeguard children and vulnerable people, according to a key Vatican advisor.

Fr Hans Zollner SJ, one of the leading Church experts in safeguarding minors and on areas concerning sexual abuse in the Roman Catholic Church and beyond, said Australia had made great strides forward and had much to teach the wider Church.Fr Zollner is in Australia to meet with clergy, school leaders and survivors of abuse. His visit coincides with the Catholic Church’s response to the recommendations of the Royal Commission into Institutional Responses to Child Sexual Abuse later this week.

The Jesuit priest is a psychologist, psychotherapist, theologian, academic vice-rector of the Pontifical Gregorian University in Rome and president of the Centre for Child Protection.

As a member of Pope Francis’ Pontifical Commission for the Protection of Minors, he has since 2014 been a key advisor to the Pope on safeguarding children. He has written or contributed to a number of books and papers on the topic, including most recently Safeguarding: Reflecting on Child Abuse, Theology and Care (2018).

Reflecting on his third visit to Australia in three years, Fr Zollner commended the structures, workshops and communications from the Church in Australia to help people better understand the issues.

“And of course there are issues about the differences in responses to the allegations from the past. Some people are not happy at all with Towards Healing and not happy with Melbourne Response, but overall, it has shown efforts on the part of the Catholic Church to give justice to victims,” he said.

Fr Zollner said during the past decade, the Catholic Church had certainly moved in the right direction in Australia, particularly through the establishment of Catholic Professional Standards Limited (CPSL).

On a pastoral level, Fr Zollner acknowledged the difficult time for the survivors of abuse, as well as for Catholics, including the many committed priests.

“It hits them as it does all faithful. I understand that being a church means living together, being together and confronting the issues together in good times and bad times,” he said.

Referring to the spiritual teachings of St Ignatius of Loyola, who advised against the temptation of spiritual desolation, Fr Zollner urged Catholics to pray and look for opportunities to improve.

“The issue of child sexual abuse committed by clergy is one grave symptom of something that is not right in the Catholic Church and there are all sorts of questions around proper governance and proper punishment and care,” he said, adding that since guidelines and processes had been put in place new allegations had dropped to almost zero in Australia.

In his Letter to the People of God, Pope Francis acknowledged that abuse had the components of physical sexual abuse, abuse of power and abuse of conscience and he urged a more diligent and critical understanding of how power is exercised in the Church, Fr Zollner said.

“To some extent the crisis gives us an opportunity to look into areas where we have not taken care of consistently,” he said.

Fr Zollner said Australia’s Plenary Council process was one beacon of light and hope due to the involvement of many lay people, particularly women.

“The Pope reminds us that women need to be included more and that we need, as a Church, to see how precisely is the Church sharing the responsibility with all people,” he said.

“This moment in history gives us a huge opportunity with Australia. The Plenary Council may find out for the whole Church how this might work.

“This is a laboratory situation – it might be very helpful. The Catholic Church in Australia has so many committed people and lots of possibility to seize the occasion.”

During his eight-day visit, Fr Zollner will attend various meetings in Melbourne and Sydney, as well as a canon law conference in Adelaide.