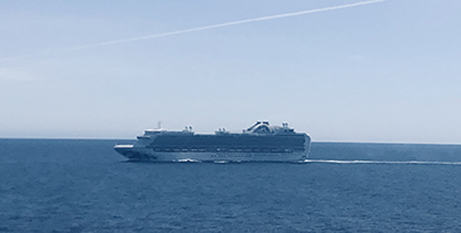 The Ruby Princess’ much-maligned status in the country’s COVID-19 story didn’t stop the Catholic Church offering pastoral care to the crew and seeking to ensure they got the help they needed.

Bishop Bosco Puthur, the Bishop Promoter of the Apostleship of the Sea ministry to seafarers, wrote to New South Wales Premier Gladys Berejiklian, calling for the state authorities to ensure the welfare of the crew was not forgotten.

“I urge you to ensure that the crew of the Ruby Princess receives the best possible medical support while in Australia, so that the crew members can return to their homes and loved ones safely,” Bishop Puthur wrote.

The ship left Australia on Thursday, but many crew members were still to fly home.
Bishop Puthur offered the support of the Australian Apostleship of the Sea network through its Stella Maris centres to complement the work of government and health authorities in offering support.

With many of the crew members hailing from the Philippines, a country where Catholicism is very prevalent, the Apostleship of the Sea reached out – remotely – to give them an Easter message.

Sr Mary Leahy RSJ, chaplain to seafarers within Sydney Ports, sent a video message to the crew, offering the hope of the resurrection and the hope and joy “that is part and parcel of the Easter story”.

“By any standards, you have done the suffering. And you deserve the best resurrection you can possibly have this Easter,” Sr Mary said.

She thanked the crew for their hospitality and support for the passengers that had sailed on the vessel and concluded with the famous Irish blessing.

A message from the harbourmaster at Port Kembla, where the Ruby Princess was docked over Easter, revealed the impact of the message: “I believe that your blessing was the best thing they have received so far in terms of hope and spirituality.”

Easter eggs and other treats were purchased using Apostleship of the Sea funding and delivered to the Ruby Princess to support the crew’s Easter celebrations.

Roslyn Rajasingam, the national director of the Apostleship of the Sea, said chaplains and other pastoral workers across the country are doing all they can to support those who work on the seas.

“We are having to rethink some of our ministry, given the isolation and quarantine restrictions, including the fact many working on ships are not even able to disembark at this time,” she said.

“The diligence of seafarers hasn’t wavered, though, and with as much as 90 per cent of Australia’s trade relying on shipping, their work is critical to our nation’s health and wellbeing – in many senses of those words.”