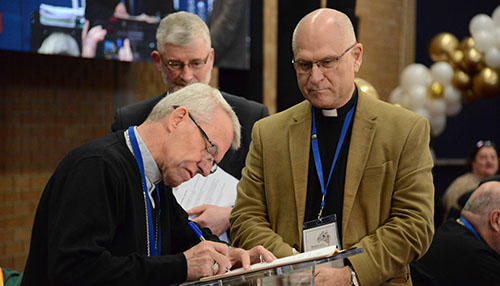 Almost four-and-a-half years after preparations for the Council began, Members met for a final session to bring to a conclusion the second general assembly, held across six days in Sydney.

In addition to celebrating the final Mass on Saturday morning, Members also approved a concluding statement signed by all Members of the assembly, reflecting on the discernment that took place over those days.

The statement said the Council had been an “expression of the synodality that Pope Francis has identified as a key dimension of the Church’s life in the third millennium”.

“Synodality is the way of being a pilgrim Church, a Church that journeys together and listens together, so that we might more faithfully act together in responding to our God-given vocation and mission,” it said.

Acknowledging that while some moments during the week had been “calm and harmonious”, others were “tense and difficult”, the statement also said “every moment has been blessed; the entire week has been grace-filled, though never a cheap grace”.

“The Holy Spirit has been both comforter and disrupter.”

After a dramatic day on Wednesday, when a pair of motions did not pass, Council Members commenced “new patterns of listening and dialogue, which are nascent but real”.

The statement agreed with Pope Francis’ assessment that synodality is “an easy concept to put into words, but not so easy to put into practice”.

“Embedding these practices of listening and discernment will continue to be essential dimensions of the implementation of this Plenary Council,” the statement said.

“They will re-shape our engagement with the world, our evangelising mission and our works of service in a rapidly changing environment.

“The work has only begun.”

On Saturday morning, Council Members confirmed the decrees of the Fifth Plenary Council of Australia, which were then signed by all bishops present. After the November meeting of the Australian Catholic Bishops Conference, the decrees will be sent to the Holy See.

Once recognitio is received by the Holy See, the decrees will be implemented and become the law of the Church in Australian six months later.

The details of the voting and final motions have been published online.

On Friday evening, Members approved a motion about the implementation phase of the Plenary Council.

The steps outlined include the establishment of terms of review for implementation by the Bishops Commission for the Plenary Council, the publication of interim reports in 2023 and 2025, and the publication of a final review report in 2027.

Find out more about the Plenary Council at: www.plenarycouncil.catholic.org.au