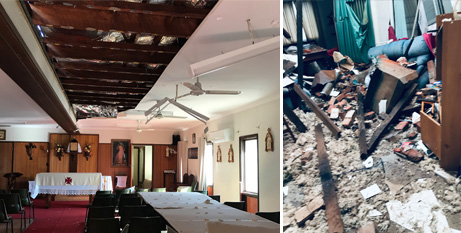 The people of the Diocese of Geraldton are remaining positive and supportive as they deal with the aftermath of Cyclone Seroja, which caused extensive damage to church buildings last week.

Geraldton Bishop Michael Morrissey said he was thankful the strongest part of the Category 3 cyclone missed the city of Geraldton by about 25 kilometres.

“The cyclone was fast-moving and intense,” he said.

“It came across the coast between Geraldton and Kalbarri at about 8pm in the evening, and it was predicted at one point to come very close to Geraldton, which would have caused devastation, to put it mildly.”

Several parishes in the diocese were damaged by the cyclone’s 170 kilometre per hour winds, including Northampton, Kalbarri, Morawa, Perenjori, Mingenew and Three Springs. A number of the affected buildings and churches were designed and built by Msgr John Hawes, the world-renowned priest-architect.

The worst damage occurred in Northampton, where the presbytery roof was blown off and parts of the ceiling collapsed. Bishop Morrissey said what’s left of the building would have to be demolished.

The nearby school was not damaged, and the Northampton church suffered only minor damage.

“In Kalbarri, the church’s roof survived, but because of the severe winds, box gutters were blown off so water got in through the ceiling and part of the ceiling collapsed,” Bishop Morrissey explained.

“In Mullewa, the heritage museum, where Msgr Hawes lived, suffered ceiling damage due to the intensity of the rain and wind, getting through the tiles and then pouring in through the ceilings.

“The other major damage was in Perenjori. The church there lost nearly half its roof.”

Bishop Morrissey said the two schools most affected, Our Lady of Mount Carmel in Mullewa and St Mary’s in Northampton, resumed on April 19 as planned for term 2.

Faced with the significant damage to property, Bishop Morrissey said the community had rallied together to support those in affected regions.

“A large number of the Filipino community from Geraldton came up and assisted the locals in Northampton, who were still trying to deal with the damage to their own homes and properties, to help them clean the church up inside,” he said on April 19.

“As such, they were able to celebrate Mass in Northampton this [past] weekend, as they did in Morawa.”

Bishop Morrissey said the diocesan Centacare was offering its counsellors to assist people suffering from the trauma of the event.

“We also have our own Communio appeal, which was set up for this very purpose – to assist people who can’t get any form of assistance from any other source,” he said.

“If people wish to make a monetary donation to the Diocese of Geraldton, they’re very welcome to do that, and we would add it to the Communio appeal. We’re still in the process of trying to determine what sort of other support we could make available to people.”

Although he acknowledged it would take “at least a year or two” before things were back to normal, Bishop Morrissey expressed his deep gratitude towards those who have offered their support during this challenging time.

“I’m very grateful to the people from outside this area who have expressed solidarity and support for us. It has meant that we’re not forgotten and I think that’s probably the best message of support that can be given to people in this situation,” he said.