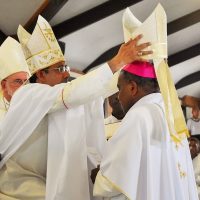 The young Catholic population of the Solomon Islands has joyfully welcomed the episcopal ordination of their first locally-born Catholic bishop.

Fr Peter Houhou, who had been vicar general of the Archdiocese of Honiara and administrator of Holy Cross Cathedral, became the new Bishop of Auki earlier this month in a jubilant, emotional and culturally-rich celebration at St Augustine Catholic Cathedral.

With Catholics making up 120,000 of the Solomon Islands’ 600,000 population, spread over more than 300 of the nation’s 900 islands, Pope Francis’ announcement in July this year was seen as greatly significant and as recognising the Church’s commitment to the country’s young Catholic congregation.

“Travel around these ‘islands lost in time’ is extremely difficult, dangerous and time-consuming,” he said.

“Many of the islands lack the basics of infrastructure and connectivity and the people are scattered on the different islands.

“Solomon Islands is a young country with a very youthful population. Young people form the majority of the population. Education is a major issue. Employment is another. Crime, drugs, abuse, domination and violence are among the issues the country needs to deal with.

“The Church has been playing a major role in education as well as in catering to the needs of the young.”

The ordination commenced with emotional cultural rituals. The whole family of Bishop Houhou, from different parts of the Solomon Islands, presented him to the Church.

He highlighted the work of the Marist missionaries and diocesan priests who had built the Church and the Catholic faith of the people. In particular, he mentioned the first two local priests: Fr Michael Aike and Fr Donasiano Hite’e.

Bishop Houhou invited all in the diocese and the Church to work together to strengthen the Catholic faith in the Solomon Islands.

He also called on the provincial and national governments to work together to address the many issues and challenges that face the community and society.

In his homily, Archbishop Kurian reminded the new bishop that his first task was to love God, love his priests and love the people of God.

“Holy Mother Church is entrusting you with three important responsibilities: To teach, to sanctify and to govern the People of God,” he said.

Archbishop Kurian thanked Bishop Houhou’s family for the precious gift of their son and invited all to pray and support their bishop.

Solomon Islands Prime Minister Rick Houenipwela was among a significant delegation of key government officials, both local and international, at the ordination.