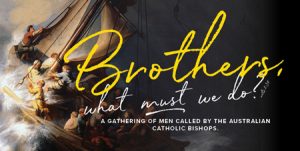 More than 700 men from across Australia, as well as New Zealand, Uganda and Kenya, will participate in the inaugural Catholic Men’s Gathering, being delivered this weekend using video technology.

The gathering had originally been scheduled for July 2020, but was postponed by 12 months due to COVID-19. The success of other events that had shifted online prompted the decision to deliver the men’s gathering using digital means in August 2020 instead, with a live event still scheduled for 2021.

Hobart Archbishop Julian Porteous, part of the event’s planning committee, said there was a sense of entering the unknown, including in terms of people’s interest in an online-only event.

“We know that events of this kind typically draw maybe 200-300 people, so while this outcome wasn’t what we had planned, it will end up seeing the content reach a much wider audience this weekend and in the coming weeks and months,” Archbishop Porteous said.

“The decision to combine the online video content with the possibility of in-person ‘hubs’ where COVID-19 restrictions allow it has, I think, been a critical aspect of the strong interest.”

There are more than 40 hub sites across the country, where men will gather in groups while adhering to local social distancing and public gathering guidelines.

The event will feature a total of five video modules, with most running for about 60 minutes. The modules include prayer, music and talks across a range of topics, as well as responses to those talks.

Participants will also be invited to consider a series of questions for reflection in each module, which can be done in small groups at hubs.

Robert Falzon, another member of the organising committee and a long-time leader of Catholic men’s ministry, said just as priests, women, young people, religious, pastoral workers and countless other Catholic groups come together with a shared purpose, the men’s gathering meets a need.

“The data shows us that Catholic men, particularly men in their 20s and 30s, are typically not deeply engaged in the life and mission of the Church,” he said.

“This event speaks into that context, and will challenge and encourage men in their roles as husbands, fathers, brothers, sons, uncles, calling them to a deeper faith that is lived out in many ways, including a life of prayer, a life of worship, a life of service and a life of mission.”

Archbishop Porteous said this virtual gathering has opened his eyes, and the eyes of others, to various possibilities.

“I have been impressed by the creativity and adaptability of the people helping to deliver these video modules, which could become a model for future events,” he said.

“The bishops are grateful to those involved in preparing this event, which adds to the Conference’s support for ministries across the spectrum of the Church’s life.”

The video modules will be posted online on August 15. The planning committee recommends those planning to participate and receive post-event communications register at this link.

Click here to find out more about the National Catholic Men’s Gathering.