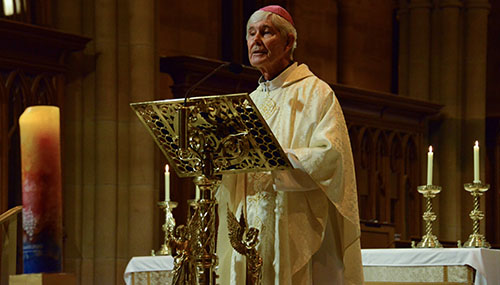 Bishop Emeritus Eugene Hurley preaches the homily at the Mass for Christian Unity for the Plenary Council.

Members of the Fifth Plenary Council of Australia were encouraged on Tuesday evening to embrace the “new and demanding urgency” of ecumenism.

Bishop Michael McKenna, the chair of the Bishops Commission for Christian Unity and Inter-religious Dialogue, celebrated Mass at Sydney’s St Mary’s Cathedral for the unity of Christians.

Darwin Bishop Emeritus Eugene Hurley, during his homily, reflected on the fact that when he was ordained as a bishop, he took the motto “Ut Unum Sint”, a Latin translation of Jesus’ prayer to the Father: “That they may be one” (John 17:2).

It was also the title of Pope John Paul II’s encyclical addressing the unity of Christians.

The motto represented his “deep desire” to work actively towards Christian unity. Inspired by the words and witness of Pope John Paul II, Bishop Hurley stressed that ecumenism is not an “appendix” to the work of the Church, but fundamental to it.

He reflected on an experience he had visiting somebody’s family home for dinner when he was a younger priest, where the son had been sent to the corner for time-out. He was doing a puzzle, and Bishop Hurley pointed out that there was “a bit missing”.

It was a small piece, he said, and was “probably flicked into the bin”. Even so, leaving it out “ruined the whole picture”.

“We are the Body of Christ,” he said. “All parts of the body work for the good of the whole. We cannot afford to have missing bits.

“We were taught by Jesus to pray ‘Our Father’. He did not teach us to pray ‘My Father’. We need to live that out.”

Concluding the homily, Bishop Hurley suggested that with the task of ecumenism, the Church’s prayer might be:

“In the jigsaw of life, let me not be the bit that’s missing, but rather, the bit that complements all those other bits around me, and so build up the Body of Christ.”

The Mass concluded a day of discernment and voting on parts 3 and 4 of the Motions and Amendments document.

Voting on parts 3 and 4 will conclude on Wednesday morning, with the outcomes to be announced at 1pm AEST.

The session on Wednesday morning will also include input from two periti – the theological advisors to the Plenary Council. The livestream will commence from 8.30am.