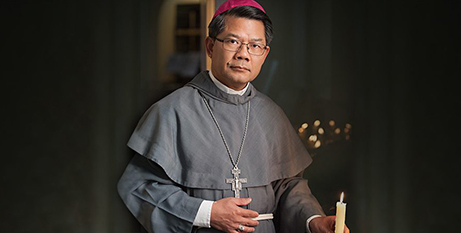 Australia’s Catholic bishops have welcomed the Government’s decision to see up to 450 asylum-seekers resettled in New Zealand, but say hundreds more need to be offered a pathway out of detention.

Home Affairs Minister Karen Andrews this week announced that 150 asylum-seekers in Australia will be able to relocate to New Zealand each year for the next three years.

“The decision is well overdue given the New Zealand Government made the offer nine years ago,” said Bishop Vincent Long OFM Conv, chair of the Bishops Commission for Social Justice, Mission and Service.

“The Catholic community continues to support and pray for all refugees and asylum-seekers in Australia and in offshore detention.

“We ask for an end to indefinite detention and for pathways to permanent visas for all those who are determined to be refugees or who meet humanitarian criteria.”

Bishop Long said the Church, which plays a significant role in welcoming and assisting refugees and asylum-seekers in Australia, continues to call for a larger humanitarian intake “so that an appropriate response can be made to those who are fleeing conflict and violence in Ukraine, Afghanistan, Myanmar, Ethiopia, Syria, Iraq, Democratic Republic of Congo, Eritrea, Yemen and Venezuela”.

The Australian representative of the United Nations High Commissioner for Refugees has estimated there are more than 1200 refugees and asylum-seekers in Australia or on Nauru.

That means not all will be able to resettle in New Zealand.

Bishop Long said a solution is needed to the several hundred who won’t be captured by the recent announcement.

“Australia has a moral obligation to resolve the asylum-seeker crisis so that people who are fleeing from violence or poverty are treated justly and humanely,” he said.

“This means ensuring their claims are assessed quickly and that people found to be refugees are resettled in Australia or in an equivalent country without delay.”