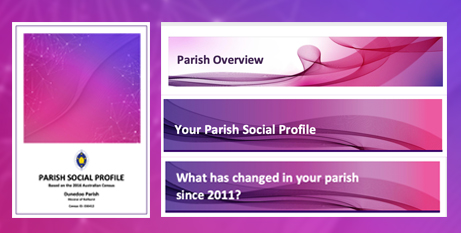 Profiles of almost 1300 Catholic parishes across Australia have just been published, offering insights that those parishes have been encouraged to use in their pastoral planning processes.

The parish “social profiles” draw on data captured in the 2016 Australian Census and examine the Catholic population within parish boundaries.

“What the latter does tell us is that while the Catholic population fell between the 2011 and 2016 Censuses, the people captured in these reports still identified as Catholic and are people whose faith is important to them, whether we see them each Sunday or not.”

Trudy Dantis, the director of the National Centre for Pastoral Research, said the reports provide statistics on a range of demographic measures, including age, sex and country of birth, that present the evolving nature of Catholic parishes.

They also contain important information on the language people speak at home, the makeup of their families and households, their income levels, their occupation, and employment status. Data on educational background and attendance at educational institutions are also included.

“The work of analysing the data from the 2016 Census is a lengthy process and, while 2016 might feel like a long time ago, the details in these reports help paint the most comprehensive picture we can of local Catholic communities,” Dr Dantis said.

The parish profiles complete the National Centre for Pastoral Research’s major reports on the 2016 Census data, following earlier reports on the Church nationally and at the diocesan level.

Other specialised reports, such as summaries on religious affiliation and ethnic diversity, will continue to be released occasionally.

“Given the length of time the analysis of customised Census data takes, this series of social profiles will provide a critical resource for the Church in Australia for at least the next four years, when we can next obtain updated data,” Dr Dantis said.

Archbishop Peter A Comensoli, the Bishop Delegate for Pastoral Research, said he values the insights that the reports offer.

“Engaging with and ministering effectively to the People of God relies upon understanding the circumstances of the faith communities to which they belong,” Archbishop Comensoli said.

“I commend these social profiles to all pastors, to parish councils, educators and to the wider community as an important resource that can assist in shaping our pastoral priorities.”

Where possible, the statistics in the 2016 parish profiles have been compared with the 2011 data.

The 1297 reports have now been published on the National Centre for Pastoral Research website.