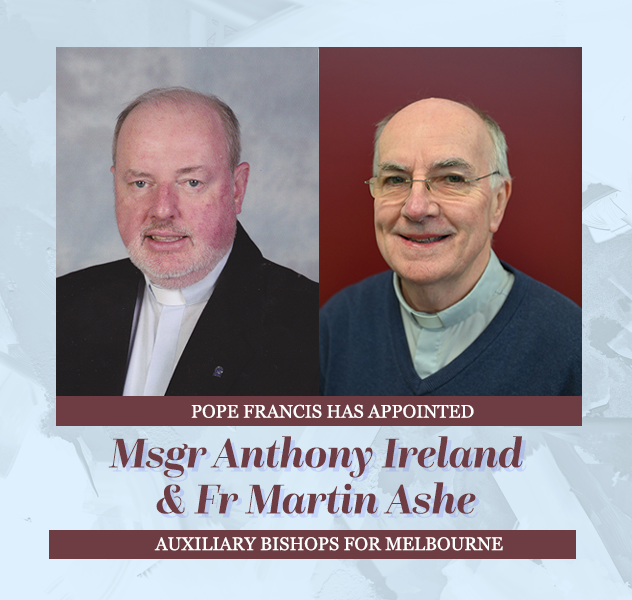 Pope Francis has this evening announced that Msgr Anthony Ireland and Fr Martin Ashe, senior priests in the Archdiocese of Melbourne, will serve as auxiliary bishops of the Archdiocese.

Msgr Ireland was born and raised in Melbourne. After completing high school, he spent several years studying and working in the business sector before entering Corpus Christi Seminary.

After his ordination in 1987, he served in a number of parishes and undertook further studies, later lecturing in moral theology at the Catholic Theological College and leading the department of moral and practical theology.

He would later serve as dean of studies and then rector of Corpus Christi College Seminary, before returning to parish ministry. Among many archdiocesan and provincial appointments,

Msgr Ireland said having supported the archdiocesan leadership, he knows of “the joyful consolations, the crosses and silent sorrows that those in high office carry”.

“So, I accept this appointment from the Holy Father with the hope that I can keep a positive balance and attitude whilst continually trusting in the Lord Jesus who promised to accompany us until the end of time,” he said.

“The ministry of auxiliary bishop comes with no agenda. It is a ministry of humility; I am to closely assist Archbishop Comensoli in his mission as Chief Shepherd in Melbourne.”

Fr Ashe was born in Ireland and was ordained in 1978 after completing his studies at the missionary All Hallows College in Dublin. As was customary for newly-ordained priests, Fr Ashe was sent to another part of the world, arriving in Melbourne in September of that year.

In addition to parish ministry, he would serve as vocations director and within the Marriage Tribunal from the late 1980s. In the 1990s, as well as undertaking further studies, Fr Ashe spent time as moderator and then pastoral director of Corpus Christi College Seminary.

In 2005 he was appointed director of ministry to priests in Melbourne, supporting fellow clergy in the process of ongoing formation. In 2012, he was appointed the inaugural parish priest of Christ the Light, taking in Doreen, Kinglake, Mernda and Whittlesea, where he still serves today.

Fr Ashe said he sees his new role as assisting the Archbishop in serving the Church’s mission in the world and “making God’s love come alive for people”.

“In this time of pandemic, I see our Church as being a Catholic community in the world that reaches out and accompanies individuals and families, staying close to them in their need and bringing Christ’s message of hope and sustaining love into their lives,” Fr Ashe said.

“We all play our part in the shaping and renewal of our Church in being more responsive to the opportunities and challenges we face within the world of our times.”

Archbishop Comensoli, in his own statement welcoming the appointments, said he was “delighted with this great news” and “deeply grateful to the Holy Father for these gifts to our Archdiocese”.

“Each of these fine priests have made valuable contributions to the life of the local Church; each know this Archdiocese well and have a wide experience of dedicated ministry; and each will bring unique skills and missionary energy to our local communities of faith,” Archbishop Comensoli said.

“They are men of deep prayer and service – with hearts for those in need and a passion to share and live the Gospel amongst God’s people.”

“They know the Archdiocese of Melbourne intimately, but they have also been involved on the national level,” he said.

“The Conference looks forward to welcoming them and working with them as the journey of the Plenary Council leads us into the future.”

The episcopal ordination for Msgr Ireland and Fr Ashe is expected to take place in late July.