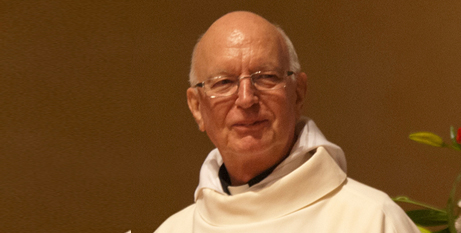 The former head of Australia’s Ordinariate of Our Lady of the Southern Cross says the Ordinariate’s success is part of a long-term progression towards true ecumenism.

Msgr Harry Entwistle, 79, has been a Catholic priest since 2012. That same year, he was named the first head of the Australian Ordinariate, which is aimed at welcoming groups of Anglicans, former Anglicans now Catholic and anyone else seeking full communion with the Catholic Church. Earlier this year, Pope Francis accepted the resignation of Msgr Entwistle, who in “retirement” will continue to care for his Western Australian parish of St Ninian and St Chad.

Media Blog spoke with Msgr Entwistle about his ministry as he moves into his new stage of life.

Originally from Lancashire, England, Msgr Entwistle became an Anglican deacon in 1963, then priest in 1964.

“And I have retired three times in my life,” he said.

“When I came here, there had just been a riot in the Fremantle prison that had started in the Catholic chapel and things were a bit tense.”

Msgr Entwistle’s ordination as a Catholic priest came after years of discernment and a persistent feeling that “the Anglican Church that had given birth to me, and which I was nurtured by, was no longer what it was and it could no longer claim to be Catholic”.

“It dawned on me that to be Catholic you have to be in unity with the Holy See, following the example of John Henry Newman,” he said.

“Rome has been extremely generous in that they have created a separate, independent diocesan-like structure with our own ordinary and our own liturgies, which they have approved, based on Anglican traditions,” Msgr Entwistle said.

Msgr Entwistle said 2019 was a particularly important year for the Ordinariate. It marks the 10th anniversary of the publication of the Apostolic Constitution Anglicanorum coetibus, which allowed for the Ordinariate to be set up, and Blessed Cardinal John Henry Newman will be canonised next month.

“The connection between Newman (a 19th-century Anglican priest and Catholic convert) and the Oxford movement and he himself coming into the Catholic Church was an inspiration to those in Anglicanism who still held on to Catholic thinking and Catholic theology,” he said.

“We just need more vocations in order to share our gifts with the wider Catholic community.”

Msgr Entwistle said the Ordinariate’s strong pastoral approach, commitment to evangelisation and “prophetic voice” of experience would continue to be greats gifts to the Catholic Church in Australia and around the world.

“We have lived in the Anglican world when the Anglicans have tried the progressive moves, we’ve lived through all that and we know that it is not the answer,” he said.

“If you look at the biblical story … whenever God’s people have wandered away from the truth, they have gotten into trouble. We know that these so-called secular innovations do not work.

The only way to work through the current crisis is to maintain the faith and be committed to God, the Church and the Church’s teaching.”

Msgr Entwistle said he had pondered at length reasons for the apparent singling out of the Catholic Church from other denominations and government agencies, with the Church being a constant target for negative media discourse.

“It’s because the Catholic Church challenges the so called ‘truths’ of the new secular wisdom, because it believes in only one truth – the truth of God’s revelation,” he said.

“Whilst challenging the multi-truths of today, the Catholic Church always looks after those who have fallen short of God’s expectations, caring for the elderly, looking after the young and abandoned, and while we must continue to care for those in need, that doesn’t mean that we have to change our standards.”

Further information about the Personal Ordinariate of Our Lady of the Southern Cross can be found on its website.