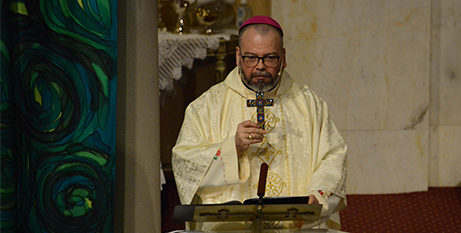 The Members of the Fifth Plenary Council of Australia were urged to “cling to the cross” and “ask the Holy Spirit to help us” as they commenced the Council’s second assembly on Sunday evening.

The opening Mass of the second assembly began with a heartfelt Welcome to Country ceremony that included an apology to First Nations peoples on Aboriginal and Torres Strait Islander Sunday.

In his homily for the Mass, Wilcannia-Forbes Bishop Columba Macbeth-Green OSPPE referred to the Aboriginal crosses provided to Plenary Council members.

Holding up his own cross, he said it was a reminder “that we need to cling to the cross and ask the Holy Spirit to help us understand the role of the cross as the reason for our joy and our hope, that we can rejoice in the midst of maybe our tiredness”.

“It’s the antidote to the tiredness,” he said, after comparing the exile and struggles of the Israelites in the Mass’ first reading to the challenges facing the Church today.

He suggested that perhaps Aboriginal and Torres Strait Islander people understand this tiredness “in a way that most of us couldn’t”.

“There are a lot of people in the Church today who feel tired too,” he said. “There have been profound changes they’ve seen in the Church and in society.

“Our Plenary Council could be, like the prophet Isaiah, a prophetic voice that communicates through the Church comfort, hope and encouragement to a tired people.”

The Apostolic Nuncio to Australia, Archbishop Charles Balvo, was the Mass’s principal celebrant.

“We know that the Holy Father, Pope Francis, also walks with us,” Archbishop Balvo said. “It is also he who is inspiring us to walk the synodal way, to take Jesus, indeed, as our example.”

At the conclusion of his homily, Bishop Columba asked the Members to “entrust our Aboriginal and Torres Strait Islander peoples and the Members of the Plenary Council to our Mother Mary, who stood at the foot of the Cross under Jesus”.

“We might also ask for the prayers of Australia’s first saint who took the name ‘Mary of the Cross’, who loved God so much in the poor and the marginalised, and did so much to help them, that we might do likewise,” he said.

On Monday, the Members will commence the discernment of the more than 30 motions that have emerged at the end of a four-year journey, including a COVID-enforced delay.

The Members will use the Motions and Amendments document published last week as the basis of their conversations, leading to votes on the final motions across the coming days.

People from across the country have been sharing messages of support through the Plenary Council website, with many focusing on the need for Members to trust in the Holy Spirit about whom Bishop Macbeth-Green preached.

Tomorrow’s opening plenary session, to be livestreamed from 8.30am AEST, will include an opening address from Plenary Council president Archbishop Timothy Costelloe SDB.

Follow the second assembly of the Plenary Council at: www.plenarycouncil.catholic.org.au