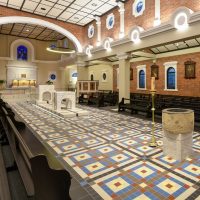 Preserving Australia’s beautiful heritage Catholic churches for future generations will be a major focus of a National Church Architecture Symposium in Melbourne next month.

Jointly organised by the National Liturgical Art and Architecture Council (NLAAC) and the ACU Centre for Liturgy, Where Your Treasure Is, There Will Your Heart Be Also will be held at the Australian Catholic University’s St Patrick’s campus from February 6 to 8.Harry Stephens, secretary of the NLAAC, an advisory body to the Bishops Commission for Liturgy of the Australian Catholic Bishops Conference, said the symposium was a timely event for the Catholic Church in Australia.

“We have many old churches, many of which are important historically and some of which are protected with heritage listing,” he said.

“The symposium is a completely unique event – there’s never been anything quite like this in Australia before.”

Mr Stephens said two major events would happen at the symposium: the release of a new set of guidelines for heritage churches and the launch of Cultura – a digital catalogue of Church-owned items including buildings, sacred vessels, vestments, sacred books, pieces of furniture and altars.

“The book we have just finished writing is called Fit for Sacred Use: Stewardship and renewal of places of worship. We’ve never attempted anything like that before and it is something that is incredibly important now,” he said.

“This new book and its guidelines seek to ensure that damage is not done to the heritage value of our churches during any work undertaken to make them fit for sacred use.”

The document is a companion to the Council’s last publication, And when churches are to be built: Preparation, planning and construction of places of worship, released three years ago.

Mr Stephens said while the Cultura catalogue was a first for the Church in Australia, England’s Catholic and Anglican churches had been compiling similar registers for many years.

There will also be other dynamic and engaging local presenters offering workshops, problem-based learning sessions, case studies and site visits.

Mr Stephens said Ms Andreae has looked after the heritage of the Catholic Church in England and Wales for many years, while Fr Vosko has completed hundreds of Church projects in the United States, earning him honorary membership of the American Institute of Architects.

“This symposium is for all those who care about the places of Catholic worship, including clergy, parishioners, architects, artists, teachers, liturgists, designers, theology and architecture students, academics and anyone with an interest in architecture, art, artefacts and heritage,” he said.

“We are expecting up to 170 people to attend this year and there is still time to register.”

For more information or to register, visit the National Church Architecture Symposium 2019 website