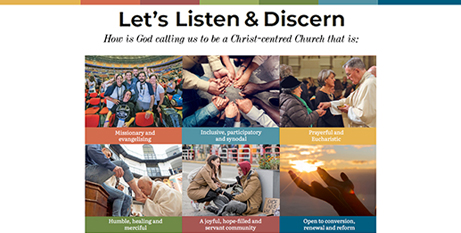 Plenary Council president Archbishop Timothy Costelloe SDB says the involvement of Catholics across the country remains critical as the Council’s Listening and Discernment stage ramps up.

The Council recently published the “Let’s Listen and Discern” guide, a tool to help people participate in the practice of communal discernment. A number of resources, including videos, have also been released to offer advice on how discernment has evolved in the Catholic tradition.

“After almost a year of inviting people to share their experiences – both past and present – of the Church and of their own personal faith, it is important that we now shift gears and fix our eyes on the Church’s future through the National Themes for Discernment,” Archbishop Costelloe said.

“The voices we captured through Listening and Dialogue represent the largest collaborative process the Church has ever undertaken in Australia and it forms a central plank of our ongoing reflection.

“But the process of discernment requires those voices to be considered in the light of Sacred Scripture, the living tradition of the Catholic Church, magisterial teachings and our evolving understanding of matters like leadership and governance – often gained from our ministries and the broader community.”

The six National Themes for Discernment invite people to reflect, to pray and to consider how God is calling the People of God to be a Christ-centred Church in Australia that is: Missionary and Evangelising; Inclusive, Participatory and Synodal; Prayerful and Eucharistic; Humble, Healing and Merciful; A Joyful, Hope-Filled and Servant Community; Open to conversion, Renewal and Reform.

Groups are encouraged to meet to consider one of the six National Themes for Discernment.

An online portal was recently opened to allow people around the country to share their discerned communal response of up to 1000 characters (about 150 words), offering practical ways to respond to the chosen National Theme for Discernment.

Those responses will be provided to the Discernment and Writing Groups that will draw together the wisdom of the Church and the broader community to draft papers for consideration in the lead-up to the first session of the Plenary Council.

Plenary Council facilitator Lana Turvey-Collins said the Discernment and Writing Groups, which will hold their first meetings in the coming weeks, are being formed from another first-of-its-kind process.

“More than 400 people – from all parts of the country, from various cultural and linguistic backgrounds, from teenagers to people in their nineties – expressed their interest in helping the Church discern what God is calling us towards at this time in our history,” she said.

“From that number, about 60 lay people, priests and religious will join 12 bishops to form the six Discernment and Writing Groups – skilled and faith-filled people who will prayerfully discern what the Spirit is saying to the Church in Australia.”

Archbishop Costelloe said the bishops on those groups “very much look forward to being part of this Church-wide process of discerning the will of God and responding to His will”.