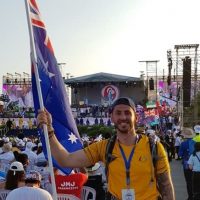 Igor Pletikosa was chosen as a flag-bearer for one of the major WYD events.

Having just returned from his three-week pilgrimage to Panama, Mr Pletikosa is getting back into the swing of teaching as assistant religious education coordinator at Mt Carmel Catholic College Varroville, in the Diocese of Wollongong.

He said the experience was not only a journey of faith, but a journey of coming to better know himself, his relationship with God and others.

“Although at times it was physically demanding, I felt that even through the challenging moments, God was present and without a doubt the Spirit was speaking to us,” Mr Pletikosa said.

“To me, the most thought-provoking aspect of World Youth Day was to witness 700,000 young people unapologetically expressing their Catholic faith despite the pressure of our ever-increasing secular world.”

One of a handful of Australian pilgrims chosen for special roles for WYD events, Mr Pletikosa said the Vigil Mass with Pope Francis, where he was the Australian flag bearer, had a tremendous impact on him.

“It was an honour to be selected,” he said. “This humbling experience provided me with the opportunity to meet young Catholics from the various countries present.

“Although there was a language barrier, the shared joy we had for our faith and for the love of Christ unified us all. I thoroughly enjoyed learning a phrase in all the different languages of the people I met.”

Mr Pletikosa said he used his height to give the Australian flag prominence.

“As I yelled out ‘Papa Francisco’, he looked up and acknowledged me with a wave and eye contact. This is a memory I will forever cherish!”

He said experiencing that multitude of people in communal silence was awe-inspiring.

“Adoration before the Blessed Sacrament at the Vigil had a profound impact on me. It was a practice that I had lapsed in, but it was a ritual I shared with my grandmother,” he said.

“During Adoration, I felt her presence and Christ’s, calling on me to reflect on my relationship with God – a relationship that at times has felt strained, but this was an opportunity to realign my faith and personal connection with God.”

Mr Pletikosa said he would definitely encourage all young people to participate in a World Youth Day.

“As the Catechism of the Catholic Church reminds us, faith requires nourishment,” he said.

“It is an opportunity to experience and witness people living and celebrating their faith and God’s grace.”