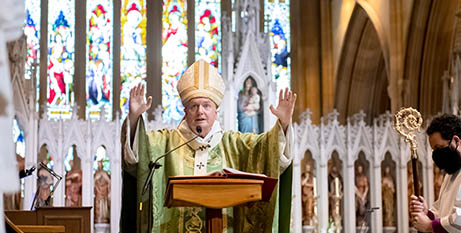 As the first general assembly of the Fifth Plenary Council of Australia nears the halfway point, Archbishop Anthony Fisher OP has preached on the power of prayer and trust in the Holy Spirit.

Celebrating Mass for the third full day of the Council, Archbishop Fisher’s homily reflected on Luke’s Gospel of the day, when the disciples ask Jesus how to pray.

“They knew Christ was the best of teachers,” he said.

“Of the 90 times people address Jesus in the Gospels, they call Him ‘Teacher’ in 60 of them, a title He also used for Himself. For our Plenary Council, also, Christ must be our wisdom and guide, and so: ‘Lord, teach us how to pray’.”

Archbishop Fisher said “the first purpose of the Church is the worthy worship of God, and our Plenary Council will surely do all it can to ensure this takes place going forward”.

Archbishop Fisher’s homily also reflected on the musings of the daughter of Karl Marx, the founder of atheistic communism, speaking to a friend after reading the Our Father.

Jenny Marx spoke of how wonderful it would be if there were a God like the one spoken about in that prayer.

“Well, Ms Marx,” Archbishop Fisher said, “we the People of God in Australia respond, ‘there is!’”

She also spoke of how transformational it would be if God’s children made his name holy, made his kingdom come, did his will, fed and forgave others, were fed and forgiven, and were freed from evil.

“For all that to be true, we must be Australia’s powerhouse of prayer,” Archbishop Fisher preached.

“Only through prayer can we hear, discern, converse, propose, decide. Only with such inspirations that we can make the decisions we must. But with true and deep prayer we can face the dreams and difficulties head on, in the grace of the Holy Spirit and the company of fellow believers, striking out with renewed conviction and humble confidence.”

Archbishop Fisher concluded: “Thy kingdom come, thy will be done — in Australia, as it is in heaven!”

On Monday, as the first general assembly opened, Archbishop Fisher wrote about the Plenary Council in The Australian.

“The Church must explore new opportunities while remaining faithful to its identity as the People of God inspired by the Gospel of Jesus and served by the hierarchy, alert to the challenges and opportunities, graces and limitations particular to our time and place,” he wrote.

Archbishop Fisher said the Council’s members are well aware of the challenges the Church is facing in wider society, including the increase of people with no faith, a decline in religious vocations, changes in law and practice, and a lack of respect for religious freedom.

“Facing up to these challenges presents opportunities for the Church to cultivate in her members ‘be-attitudes’ of prayerfulness and contemplation, justice and peacefulness, patience and compassion expressed in action,” he wrote.

“It calls us to speak passionately for the voiceless, whether unborn or newborn, disabled or mentally ill, trafficked or refugees, indigenous or homeless, frail elderly or dying. And it demands we draw the connections between the physical, human and spiritual ecologies and highlight responsibilities towards each.”

Follow the first general assembly of the Fifth Plenary Council of Australia at www.plenarycouncil.catholic.org.au, including access to daily Masses and livestreams.