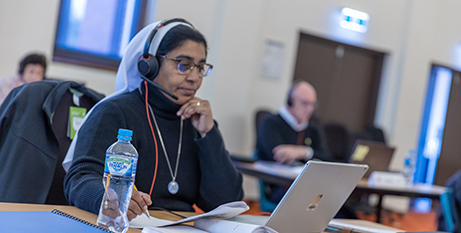 The first “spiritual conversations” of the Fifth Plenary Council of Australia covered a broad range of thoughts and topics from Baptism being the place for fundamental conversion to the need for the Church to tend to its past and current failures.

The process for communal discernment by the 278 members during the Plenary Council’s two assemblies follows the centuries-old practice of “spiritual conversations”.

Using that process, 10 groups of members are praying with and reflecting on 16 questions across six themes: Conversion, Prayers, Formation, Structures, Governance and Institutions.

During this morning’s livestream, a representative of each of the 10 groups provided a summary of Monday afternoon’s prayer and discussion.

A common theme emerging from those small group sessions was the importance of listening to and accompanying people, including those on the peripheries and at all levels of the Church.

There was also an emphasis on hearing the voices of “churches” in the plural – noting the rich diversity of liturgy and traditions in the Eastern Rites and migrant communities, many of which have had a long history in Australia.

One group spoke of the differences between rural and metropolitan parishes and another pointed out that the Council agenda needed to address the issue of “ecumenical and interfaith dialogue and cooperation”.

After a moving Acknowledgement of Country during Monday’s opening plenary session, the group exploring Indigenous issues expressed the belief that the Church would be “enlivened” with the full participation of First Nations peoples. There was a call for Aboriginal and Torres Strait Islander people to be able to minister to their communities and to each other.

Speaking on behalf of her small group, Selina Hasham said that being a Church on a “mission of contrition” might be shameful and humbling, but it could be a source of new life.

Virginia Bourke said within her group there was a sense of coming to the end of a particular way of being Church in the world – “a change of era”, prompting a new paradigm of Church.

“We need new wineskins,” she said during her group’s report.

That group also talked about the need for “imagination” in how to present a missionary Church and suggested drawing on existing expertise on governance and mission, including from Catholic social service and health agencies.

On the question of prayer, Council members spoke a great deal from personal experience and forming a personal relationship with Christ which “then enables us to go out to others”.

The question of formation was considered across a number of groups and seen as an issue for not just the ordained or Church leaders, but should be “normalised” as a culture within the Church.

One group suggested the experience of married deacons and priests in the Eastern Rites had “much to offer in terms of clerical formation, particularly the role that wives can play in formation”.

During a discussion on clericalism, one group asked how we could prevent a “bad culture” of clericalism in a group, whether it be priestly or lay.

Parishes were seen as a place where the laity could be empowered to live out their baptismal calling as missionary disciples, with faith formation being an important part of this.

The group on governance reflected on “How do we as a Church walk side by side, women, men, lay and ordained, priest and Bishop towards the road to Christ?”. The discussion included why women didn’t have a significant role in governance.

Catholic education was considered by one group as having served the Church well for 200 years, noting that the emergence of the Catholic tertiary sector had enhanced and changed the landscape.

In reporting back to the full assembly, Sr Cecilia Joseph OP said her group spoke of the role of the school in supporting families, but not replacing the family, and the need to strengthen the sacramental practice of our students and our families.

“We further discussed the increasing number of non-practising families and non-Catholics in our schools and institutions and how we reach out to them effectively,” she said.

“It was noted that our schools are full, but our churches are empty.”

While many members expressed hope and excitement about the assembly on the first full day of the first general assembly, others were “anxious” and had a sense of urgency for change.

The livestream of this morning’s plenary sessions, including the full reports from the 10 small groups, can be accessed here.