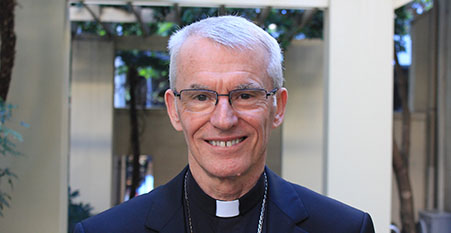 The Conference agreed that the president and vice-president’s two-year terms will commence on July 13, 2022, after the Second General Assembly of the Fifth Plenary Council of Australia.

Archbishop Costelloe was appointed an Auxiliary Bishop of Melbourne in 2007 and Archbishop of Perth in 2012.

He is the first president of the Bishops Conference from Western Australia and, as a priest of the Salesians of Don Bosco, the first member of a religious order to be elected president.

Archbishop Costelloe will replace Archbishop Mark Coleridge, who served as president for four years. Archbishop Coleridge was ineligible to run for a third term because he will turn 75 in September 2023.

Archbishop Costelloe paid tribute to Archbishop Coleridge, saying he had guided the Bishops Conference through important and sometimes challenging times.

“It was Archbishop Coleridge who guided our response beyond the Royal Commission, represented the Church in Australia at the global summit on sexual abuse and steered the bishops through a pandemic and a host of other challenges,” he said.

“Archbishop Coleridge has been a calm and considered leader locally and in the global Church and will be a trusted adviser for me in this new role.”

“The Church in this country is an immense contributor to our society, through our parishes, our schools, our hospital and aged care, our social services and countless other ministries,” he said.

“As we continue to contemplate how we live out the Gospel in this age, including through the Plenary Council, I look forward to working with my brother bishops and the People of God to carry forward Christ’s mission.”

Archbishop Fisher, the Archbishop of Sydney, has served as vice-president of the Conference for the past four years.

“I look forward to continuing to serve the Conference in this way and working closely with Archbishop Costelloe on key issues for the Church’s mission in Australia,” Archbishop Fisher said.