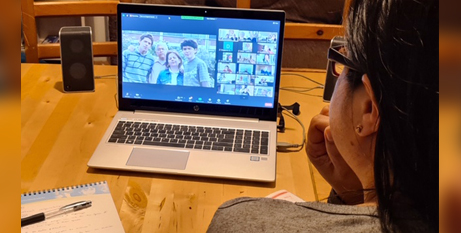 by Karen and Derek Boylen

Family is a universal and challenging experience for everyone. It is also the future of the Church.

Last week, more than 250 people, representing 72 bishops conferences and more than 30 groups and movements from around the world, gathered online to discuss marriage and family.

The focus of the forum was the opportunity and challenge that marriage and family life is for the Church and society.

In an opening address, prepared by Pope Francis, he called participants “to bring God’s love to families and young people, who will build the families of tomorrow, we need the help of the families themselves, their concrete experience of life and communion.

“We need spouses alongside the pastors, to walk with other families, to help those who are weaker, to announce that, even in difficulties, Christ is present in the Sacrament of Marriage to give tenderness, patience and hope to all, in every situation of life,” the Pope said.

Pope Francis particularly encouraged married couples, saying: “How important it is for young people to see with their own eyes the love of Christ alive and present in the love of spouses… just as the spouses Aquila and Priscilla were valuable collaborators of Saint Paul in his mission, so too today many married couples, and even entire families with children, can become valid witnesses to accompany other families, create community, and sow seeds of communion…

“Marriage, like the priesthood, serves to build up the People of God and confers a special mission to spouses in the edification of the Church. The family is a domestic Church.”

The theme for the webinar was “Where do we stand with Amoris Laetitia? Strategies for the pastoral application of Pope Francis’ exhortation.”

The forum focused its attention on several key topics of relevance to the Church globally, including:

• Marriage and the spirituality of marriage as a cornerstone of family life;
• The development of a marriage catechumenate for the close, immediate and ongoing formation of couples in the Sacrament of Marriage;
• The education and formation of children in the family;
• The missionary spirit of the family; and
• Accompanying families in difficult situations.

A primary theme was the missionary spirit of the family and the role of accompaniment. As participants, it was heartening to reflect on the idea that, in Scripture, the Word of God was entrusted to a family. Pope Francis is calling us, once again, to make Christ present in the world today through our families – to make our families living witnesses to the dynamic and creative expression of God’s love.

We are called to accompany those who are struggling so they may encounter the living presence of Christ in our homes. That is how we evangelise the world. Our homes can be places where people encounter faith and where we journey with people. Importance was placed on our pastoral response to families experiencing fragility.

The Church and laity are called through prayer and discernment to accompany and integrate vulnerable families into the life of the Church, paying attention to the circumstances of each couple and family; always bearing witness to Christ’s love.

Participants listened to testimonies from global initiatives supporting and assisting couples and families. These included examples such as Worldwide Marriage Encounter (Singapore), Witness to Love (USA), The Academy of the Family (Germany), School of Families (Spain) and the Missionary Family Program (Colombia), among others. It was an opportunity to share ideas, resources and initiatives, and to draw on the wisdom of the Church universally.

Pope Francis also urged people to find time, this year, to read the Amoris Laetitia. He is encouraging people to read it slowly, completely and prayerfully.

That suggestion was echoed by Cardinal Kevin Farrell, prefect of the Dicastery for Laity, Family and Life, in his introduction to the world forum. Cardinal Farrell said: “The apostolic exhortation should be read as an integral whole.”

This year is the fifth anniversary of the release of the apostolic exhortation, and Pope Francis has declared this to be the Year of Amoris Laetitia Family. Pope Francis is calling the Church, parishes and laity to a renewed focus on marriage and family life.

More information about the Year of Amoris Laetitia Family can be found at http://www.laityfamilylife.va/ and locally in Australia at https://catholic.org.au/amorislaetitiayear
These websites will be updated as the year progresses.

Perth couple Karen and Derek Boylen were part of the Australian contingent to take part in a Vatican conference on marriage and family in June 2021.