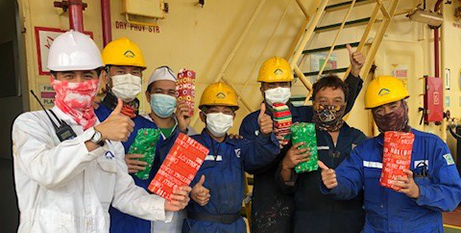 Seafarers with their care packages, distributed thanks to Stella Maris Australia

Thousands of people working on the seas have received care packages in recent weeks following the allocation of Stella Maris Australia funding to port chaplaincies across the country just before Christmas.

Bookmarks made by students at an Adelaide school were part of the care packages distributed to hundreds of seafarers who docked there.

“Something individualised, like those bookmarks, or something like board games, as were donated at another port, have the potential to lift the spirits of the men and women working on the ships,” said Roslyn Rajasingam, national director of Stella Maris Australia.

“Our care packages can help with the spiritual health, physical health and mental health of those on board, and each of those aspects needs attention in everyone’s lives.”

During the holiday season, Christmas puddings were included in some packs.

“Being away from home for significant events and milestones is not uncommon for those who work on the oceans, but they still appreciate – as letters we receive demonstrate – the ways in which people help them mark those special occasions,” Mrs Rajasingam said.

She said for all the small “victories” of supporting seafarers and providing spiritual and pastoral care, it is an uncertain and challenging time.

“Having already postponed some of the celebrations scheduled to mark 100 years of this international Catholic ministry, it’s disappointing that a key gathering set for Scotland later this year has now been cancelled.”

Mrs Rajasingam said those setbacks won’t dampen the enthusiasm of those working across the country.

“We are lucky to have a great network of dedicated chaplains, workers and volunteers who, thanks to the generous support of individual, parish, diocesan and organisational donors, are able to be dispensers of charity and hospitality,” she said.

Find out more at www.aos-australia.org