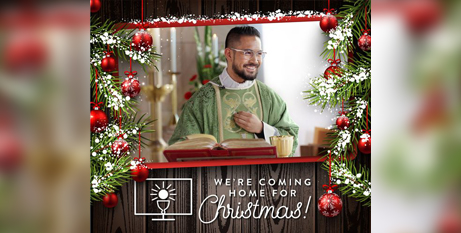 People unable to attend their local parish for Christmas celebrations will get a special present, with a bonus Mass to be broadcast on Channel Ten at 6am on Christmas Day.

Mass for You at Home has been broadcast each Sunday for more than 50 years, but there was no television Mass scheduled for Christmas Day, which falls on a Saturday this year.

Mass for You at Home executive producer Daniel Hopper worked with Channel Ten to arrange for Christmas Mass to be broadcast in addition to the regular Sunday Mass that week, which will be for the Feast of the Holy Family.

“For decades, Channel Ten and the Church have been walking together in providing this highly valued ministry to people who, for whatever reason, can’t worship with their local community,” Mr Hopper said.

“To be able to collaborate with Channel Ten and bring the Mass into people’s homes, hospital rooms, aged care facilities, prison cells and onto their mobile devices on the great feast of Christmas is a real blessing for us and for those who rely on Mass for You at Home.”

Debra Vermeer, chair of the Mass for You at Home national committee, said the additional Mass was a great way to end 2021.

“We have been overwhelmed by the support – in all its forms – that the Mass for You at Home community has offered us during the year,” Mrs Vermeer said.

“We are pleased to end this year of transition to a new partnership between the Diocese of Wollongong and the Australian Catholic Bishops Conference by giving our faith-filled community a special Christmas present.”

It was recently announced that Mass for You at Home will continue to be broadcast in 2022.

The fundraising program launched in April this year will continue, to cover the significant cost of broadcasting and producing Mass for You at Home.

Find out more at www.massforyou.com.au