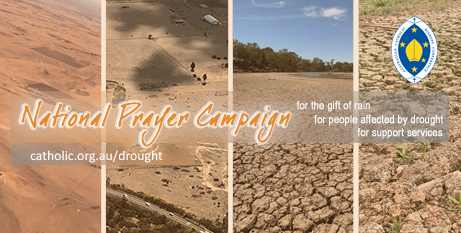 The Catholic Church in Australia is dedicating the month of November as a time to pray for those affected by crippling drought conditions and to pray for the gift of rain.

Parishes, schools, families and other Catholic communities across the country are being encouraged to participate in the National Prayer Campaign for Drought, which also invites people to provide assistance to those most in need.The Bureau of Meteorology says that, on some measures, the current drought is the worst in 100 years or more, with most parts of Australia’s eastern states declared to be in drought.

Bishop Columba Macbeth-Green OSPPE from Wilcannia-Forbes oversees a diocese that covers about half of New South Wales, including some of the most drought-affected areas in the country.

He said the month of prayer is an additional response to the local work being done in affected communities.

“Some of our Catholic ministries, along with other faith-based, charitable and government organisations, are doing remarkable work, supporting people with material needs, offering financial support and responding to people’s psychological and spiritual needs,” Bishop Columba said.

Bishop Columba said the Bible, in both the Old and New Testaments, has stories of rain being “God’s gift” to people who are suffering,

“In times of drought like we are experiencing now, we should pray for God’s gift of rain, which will have the power to quench our arid lands and also lift many people’s fallen spirits,” he said.

Bishop Columba said the National Prayer Campaign must be truly national, noting that the whole country suffers when there is a drought – especially one of this magnitude. The Church needs to be an example of recognising that reality.