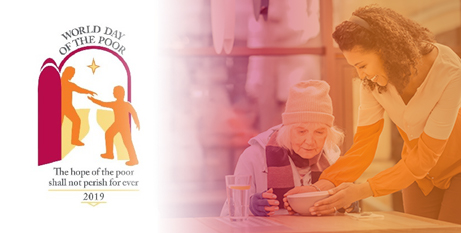 In the leadup to next month’s World Day of the Poor, the Church in Australia is recognising volunteers who work to bring hope to those in need.

The third World Day of the Poor, to be observed on Sunday, November 17, will focus on the theme “the hope of the poor shall not perish for ever”.

Taken from the Book of Psalms, Pope Francis said those words “express a profound truth that faith impresses above all on the hearts of the poor, restoring lost hope in the face of injustice, sufferings and the uncertainties of life”.

“The psalm was composed at a time of great economic development that, as often happens, also led to serious social imbalances,” the Holy Father wrote.

“The inequitable distribution of wealth created a significant number of poor people, whose condition appeared all the more dramatic in comparison with the wealth attained by a privileged few.”

Today, too, Pope Francis says, “we must acknowledge many new forms of bondage that enslave millions of men, women, young people and children”.

“Daily we encounter families forced to leave their homeland to seek a living elsewhere; orphans who have lost their parents or were violently torn from them by brutal means of exploitation; young people seeking professional fulfilment but prevented from employment by short-sighted economic policies; victims of different kinds of violence, ranging from prostitution to the narcotics trade, and profoundly demeaned,” he lamented.

“How can we overlook, too, the millions of immigrants who fall victim to any number of concealed interests, often exploited for political advantage, and are refused solidarity and equality? And all the homeless and ostracised persons who roam the streets of our cities?”

Bishop Vincent Long van Nguyen OFM Conv, chair of the Bishops Commission for Social Justice, paid tribute to the thousands upon thousands who volunteer in Catholic organisations across Australia to assist those in need.

“They work in our jails, in charitable organisations with those who have fallen on hard times, and they help the most vulnerable members of our community,” he said.

“For this third World Day of the Poor, we say thank you to each and every one of our volunteers. Know that your work is bringing hope to the lives of the poor and poor in spirit.”