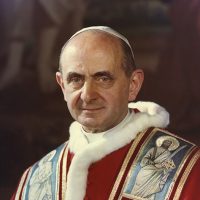 In Amoris Laetitia, Pope Francis reminds us that “we need to return to the message of the encyclical Humanae Vitae”. (82)

How are we to understand this call? I think the key is to be found in the Pope’s recent statement to doctors that “the Church is for life!” It always has been. As the Scriptures say: “I have come that they may have life and have it to the full.” These words of Christ resonate through the ages. Often Humanae Vitae has been overlooked for what is for some an uncomfortable message – one that reiterates the Church’s longstanding teaching that contraception is always objectively wrong and impermissible. The Catechism bears this out.

When the Church reminds her children that something is not good for them, she does so out of a real concern for their wellbeing and seeks to encourage them along a “better path”; one that lifts them to the full experience of life and love. As Pope Francis said: “The Church is for life!”

Before this “better path” is presented, we do well to look over the past 50 years where the greater part of western society accepted that the contraceptive pill was somehow going to usher in a new era of sexual freedom.

In what is a lesser known part of Humanae Vitae, Pope Paul VI predicted three devastating impacts that the pill would have on society if it was popularly accepted. Each of these prophetic predictions have come true and have formed veritable cancers that threaten the very existence of family life today.

First, Paul VI stated that contraceptive practice would aid and abet “conjugal infidelity and the general lowering of morality”. We can look around today and see that this has in fact happened.

There is an epidemic of pornography, pre- and extra-marital affairs are the order of the day, sexually transmitted diseases abound and advertising draws heavily on perceived sexual appetite. This is the wholesale result of a general “sex with no responsibility” mindset.

Second, the Pope warned that men would lose respect for women due to the emphasis on subjective “pleasure” rather than seeking to know the other as a beloved life companion imbued with innate feminine dignity. How many marriages have lost their “inner soul” and harmony as the pill takes residence in the inner sanctum of marital life and where the co-responsibility for fertility is thrown back at the woman to “take care of it”?

It would be fair to conclude that this masculine predation and sexual coercion is at the heart of the ‘#MeToo’ movement where the woman is seen to be “up for grabs” and at the ready disposal of the male partner.

Third, the Pope recognised that public authorities would seek to implement birth control measures as a form of population policy and control. We only have to look to China’s one-child policy to see how government intervention has totally destroyed the gender balance across the nation and has instead introduced the overt arm of the law into the very heart of the marital bedroom. China is only one of many nations where this culture is deeply embedded.

So, now to the better path. Pope Paul VI in Humanae Vitae asked specifically for those in medical science to use their gifts to establish means that “through the observation of natural cycles of fertility, strive to establish a satisfactorily clear basis for the moral regulation of offspring”.

Today we have, in the aptly named Pope Paul VI Institute for the Study of Human Reproduction, a world leading body of researchers and practitioners who have successfully developed a program of fertility awareness that educates in and complements the natural cycles inherent to feminine and masculine biology.

This is in no way a negative outcome of the Church’s insistence on adherence to natural law, but rather a maternal encouragement to open oneself up to the beauty and mystery of the human person and the inherent truth that always tends towards the good of each person.

Along with the excellent Billings Ovulation and Sympto-thermal methods of fertility awareness, which have long been used in the Australian context, the Creighton Model FertilityCare System and NaPro Technology are each in their own specific sphere – a welcome fruit of the concerted effort of the Paul IV Institute. It provides couples with a deep understanding of their complementary biology and a systemic methodology that corresponds to the mind of the Church and does away with the love-quashing and health-draining qualities of contraceptive use.

As a Church community, we have a responsibility to ensure that every young adult and every couple who comes to us for marriage preparation is given, at the very least, the opportunity to be abreast of this critical and life-changing information. The Church is for life; let’s be proactive in sharing this Good News!

Steven Buhagiar works in the Life Marriage and Family Office for the Diocese of Broken Bay.