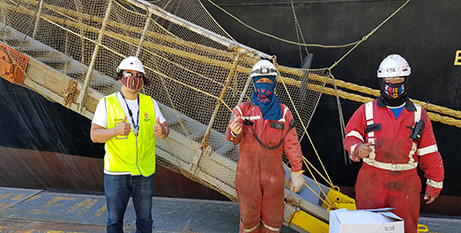 Cardinal Peter Turkson has urged Catholics globally to give thanks for the efforts of maritime workers and pray for their health, safety and wellbeing as the Church celebrates Sea Sunday.

Parishes and Church ministries in Australia are among those that mark Sea Sunday on the second Sunday in July – this year, on July 11.

In a message published on July 7, Cardinal Turkson, the prefect of the Dicastery for Promoting Integral Human Development, spoke of the additional challenges that seafarers have faced during the COVID-19 pandemic.

Such challenges have included extended periods of work without contracts and without shore leave. Some unscrupulous employers abandoned ships and crew at sea. These add to other ever-present dangers for those working on the oceans, such as piracy and storms.

Cardinal Turkson offered a reminder in his message of the important role such workers have played during a global pandemic.

“The world may have come to a standstill but the ships have never stopped sailing from port to port delivering critical medical equipment and medicines to support the fight against the spread of the virus,” he stated.

“This emphasises that the maritime industry is a vital part of the world’s economy. Some 90 per cent of the world trade is carried by ships or, more accurately, by the 1.7 million seafarers who work on the ships.”

Cardinal Turkson continued: “We thank the People of the Sea for their work, and our gratitude is transformed in our prayer that the Lord grants them strength in moments of weakness, unity in diversity, safe and smooth sailing and, at the end of their contract, happiness to be reunited with their loved ones.”

In addition to inviting prayers from the faithful, the Sea Sunday message also makes practical recommendations to improve the conditions under which seafarers work.

Cardinal Turkson calls for the maritime industry to collaborate to support vaccination of seafarers, facilitate crew changes and protect their human and working rights.

He also urges governments and ship-owners to better recognise and respect workers’ dignity and rights, before ending his message with prayers for those who have died at sea and those who minister to seafarers.

The Sea Sunday Appeal is also launched annually each Sea Sunday, inviting people to donate to the work of Stella Maris supporting seafarers around the country.

More information about Sea Sunday, the Sea Sunday Appeal and the Stella Maris ministry in Australia can be found at: https://stellamarisaustralia.org