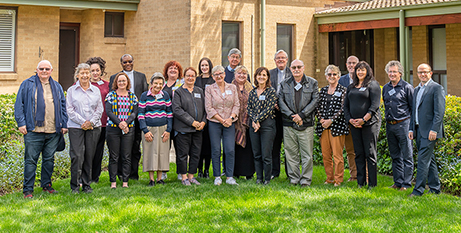 Archbishop Timothy Costelloe SDB last week thanked diocesan archivists from across Australia for their “significant contribution to preserving the cultural patrimony of the Catholic Church”.

Archbishop Costelloe, addressing the Catholic Diocesan Archivists of Australia (CDAA) gathering in his capacity as president of the Australian Catholic Bishops Conference, acknowledged the critical role of record-keeping in the Church.

“Ensuring there is good information governance in place greatly assists the Church’s objectives of accountability, transparency and robust decision-making,” he said in a video message.

“As archivists for the Catholic Church across Australia, each of you bring an array of distinct knowledge and skills to your roles building a rich and diverse history in your respective dioceses.”

Eighteen archivists attended the annual CDAA gathering in Canberra – the first to be held in person since 2019. Another four archivists joined the meeting remotely.

In addition to hearing from Archbishop Costelloe, Apostolic Nuncio to Australia Archbishop Charles Balvo and David Fricker, former director-general of the National Archives of Australia and outgoing president of the International Council of Archives, also addressed the archivists.

Mr Fricker spoke of the importance of gatherings like the CDAA meeting, especially in a line of work that is evolving quickly.

“We do need to make time to really challenge ourselves and to think about how we are stretching ourselves and are we deliberately reshaping the work we do to do a better job in the future,” he said.

“Because otherwise, if we’re just patting ourselves on the back and continuing to do very well what we did last, as we all know, that means that we’re going backwards.”

The archivists took the opportunity to discuss their own protocols and processes, with the goal of embedding best practice in the Church.

They also reviewed the CDAA statement of purpose and elected Annie Pawley from the Diocese of Sale as the national convenor.

Next year’s gathering is expected to be held in Ballarat.