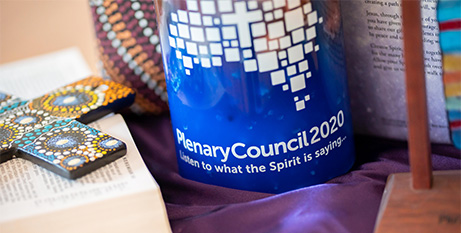 A combination of data analysis, prayer and reflection has helped the Plenary Council 2020 process move from the voices of more than 222,000 people across the country to a number of National Themes for Discernment.

More than 75 people met last week to listen to and understand the qualitative and quantitative analysis of the submissions received during the 10-month Listening and Dialogue phase of the Plenary Council.

The National Centre for Pastoral Research, using best-practice analysis skills and software, read the almost 17,500 group and individual submissions and over three days provided their insights for those attending the meeting.

“Our job was to review and report on how people responded to the question ‘What do you think God is asking of us in Australia at this time?’,” explained National Centre for Pastoral Research director Trudy Dantis.

Archbishop Timothy Costelloe SDB, president of the Plenary Council, said it was a significant responsibility to listen to the stories from the hearts and minds of ordinary Catholics across a huge variety of contexts – sometimes in harmony with one another, at other times divergent.

“This was done by listening to the information Dr Dantis and her colleagues presented, then taking time for reflection on those subject areas in prayer,” Archbishop Costelloe said.

Members of the Plenary Council Local Coordinators Network, representing dioceses and archdioceses, met over the subsequent two days to discuss how the National Themes for Discernment could be communicated and considered by people in their local faith communities.

“As with other meetings of this group of about 50 people from around the country, there was an incredible energy in the room,” Plenary Council facilitator Lana Turvey-Collins said.

The National Themes for Discernment and other analysis from the Listening and Dialogue phase of the Council will be released throughout June, beginning at Pentecost.

Visit the Plenary Council website for more information at www.plenarycouncil.catholic.org.au