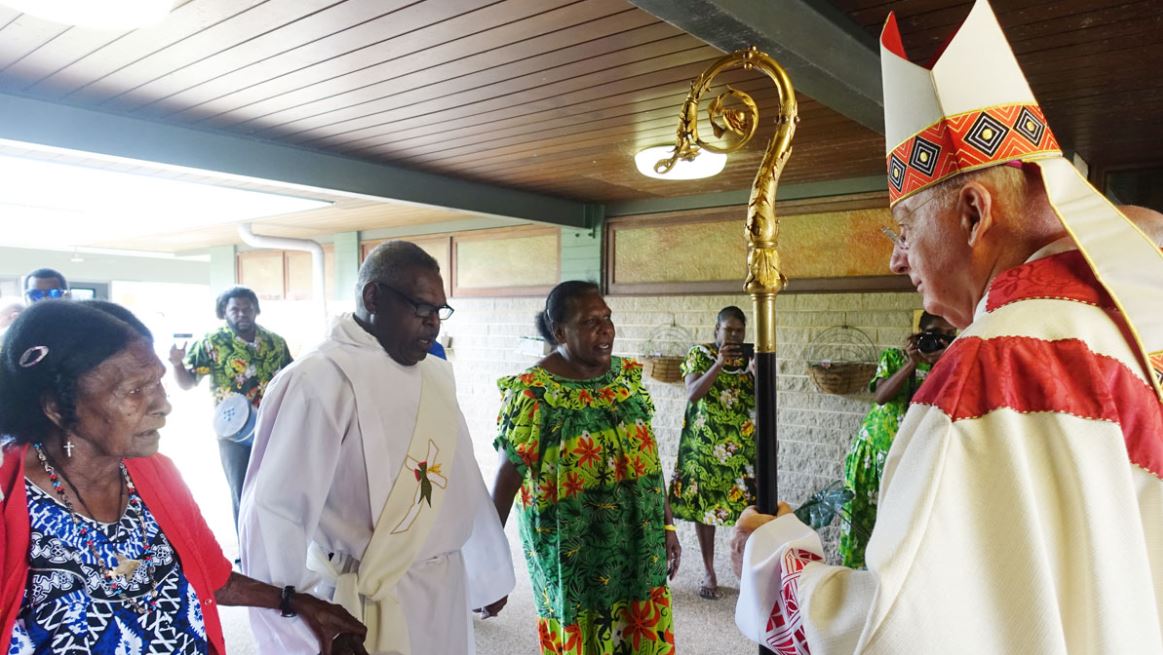 The first ordination of a Torres Strait Islander into the Catholic priesthood in Australia was celebrated with a culturally-symbolic ceremony in Far North Queensland last Sunday.

In St Francis Xavier Church in Cairns, Lismore Emeritus Bishop Geoffrey Jarrett ordained 55-year-old Fr Kopel Gibuma to the Catholic priesthood to minister in the Ordinariate of Our Lady of the Southern Cross (OLSC).

Fr Gibuma is the first Torres Strait Islander to be ordained a Catholic deacon and Catholic priest and he will minister in the parish of Cairns with Dauan Island, in the remote top western islands of the Torres Strait.

“It is a historic moment which could encourage more Indigenous men to become priests in the future,” said Msgr Harry Entwistle, the first Ordinary of the Personal Ordinariate of the OLSC.

“We hope that this will also be the beginning of more of our Indigenous brothers and sisters to explore vocations to the religious life.”

Msgr Entwistle said it had been a joyous weekend for the Ordinariate parish of St Claire, Cairns with Holy Cross Dauan Island, with the Confirmation of five young people of the parish preceding the Sunday ordination.

“Both the Confirmation and Ordination services were ‘flavoured’ with Torres Strait Island and missionary hymns while traditional dancers brought the deacon to church to be ordained, and entertained the guests during the following celebratory lunch,” he said.

“In more ways than one this was a historic moment in the life of the Catholic Church in Australia, for which we thank God.”

It has been seven years since Pope Benedict XVI created the Personal Ordinariate of Our Lady of the Southern Cross on June 15, 2012.

Australia’s was the third Personal Ordinariate to be established as a vehicle by which those of Anglican heritage could be received into full communion with the Catholic Church as Catholics, while maintaining certain distinctive elements of their theological, spiritual and liturgical heritage. The Australian Ordinariate has 16 communities and 22 priests.

To read more about the Personal Ordinariate of Our Lady of the Southern Cross, visit its website.

Ordinariates are also located in the United Kingdom and North America.