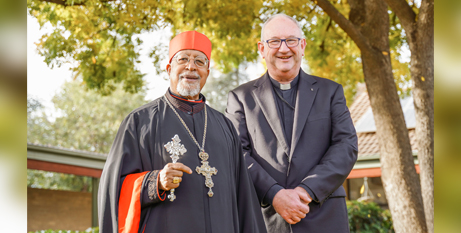 Ethiopian Cardinal Berhaneyesus Souraphiel CM says his trip to Australia gives him the chance to thank individuals and organisations supporting projects that are helping transform the lives of people in the east African nation.

Cardinal Souraphiel is a guest of Catholic Mission, which is funding key educational, agricultural and social initiatives in Ethiopia. He said the support from Australia allows the Church in Ethiopia to make a major contribution to alleviating poverty.

“We see education as one of the key ways out of poverty, and the Church runs more than 430 schools in the country – second only to the government,” he said.

That is despite Catholics making up just 2 per cent of the population, with Orthodox Christians at around 45 per cent and Muslims at 30 per cent the largest religious groups.

“The Catholic Church is appreciated by all in the country, including by the government, because our services – our health care, our schools, our social services – are open to all,” Cardinal Souraphiel said.

The Church is also working diligently to deliver peace and stability in the county – something that has often been elusive in recent years.

Cardinal Souraphiel said the Church is seen by many as “bridge-makers”, and he has served as head of the country’s Reconciliation and Peace Commission.

“After the United Nations World Food Program and the Red Cross, the Church is probably the next largest group assisting with the humanitarian effort in the north and west of the country,” he said.

“We are particularly trying to reach women and children and the elderly, who are the most affected.”

Food shortages are another major challenge in Ethiopia, the cardinal explained during a visit to the Australian Catholic Bishops Conference on May 25.

Catholic Mission agricultural projects, including a campaign to provide goats to families, are helping address malnutrition and hunger. That support, coupled with drought-breaking rains, will hopefully allow for the food shortage to ease.

Cardinal Souraphiel said his visit is “a chance to express our gratitude to Catholic Mission, to the Australian Bishops, to religious congregations and the Catholic community for their support”.

He has spent time with two religious sisters who previously served in Ethiopia. He hopes other Australians might follow in their footsteps and capture the missionary impulse to travel overseas and effect positive change.