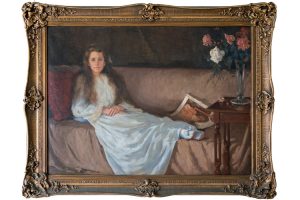 Australian bishops are hopeful that a number of Australians could follow in the footsteps of St Mary of the Cross MacKillop and enter the Church’s Communion of Saints.

As part of their Ad Limina Apostolorum pilgrimage, which commenced on Monday, bishops met Wednesday with officials from the Congregation for the Causes of Saints, including its prefect, Cardinal Giovanni Becciu.

Progress on the journey towards beatification of two prominent Australians – Eileen O’Connor and Dr Sr Mary Glowrey – was high on the meeting’s agenda.

Sydney Auxiliary Bishop Anthony Randazzo, who has been involved with the cause for canonisation for Eileen O’Connor, said he was encouraged by what he heard from the officials of the Holy See.

“While we in Australia already understand the holy life that Eileen led, including co-founding Our Lady’s Nurses for the Poor, and we would like things to proceed quickly, the congregation explained that the process is complex – and rightly so,” Bishop Randazzo said.

The bishops also discussed other holy people who might one day progress down the path to sainthood, including famed 19th-century humanitarian Caroline Chisholm, St Vincent de Paul pioneer Charles O’Neill, Constance Gladman, a religious sister who was killed while teaching in Papua New Guinea, and Fr Joseph Canali, known as “the Apostle of Brisbane”.

Bishop Bosco Puthur, who led the delegation to the Congregation for the Causes of Saints, said as well as discussing people of the past who lived saintly lives, the conversation also explored how people today can pursue holiness.

“We can sometimes look at the saints and think that we couldn’t possibly live like they did,” Bishop Puthur said.

“But there is no reason that we can’t hold them up as our role models whose faith, virtues and values gave witness to their Christian discipleship – even if they aren’t yet recognised as saints by the universal Catholic Church.”

In the meeting with the Congregation for Clergy, the bishops discussed the ongoing development of the Ratio Nationalis, a document to guide bishops in helping men discern the priestly vocation, in forming them during their seminary training and ensuring they embrace ongoing formation after ordination.

Congregation officials promoted efforts to increase the involvement of women in the discernment and formation processes.

The bishops’ day concluded with Mass at St Paul Outside the Walls, the third of four papal basilicas in which the bishops will celebrate Mass. Archbishop Peter A. Comensoli of Melbourne was the principal celebrant at the Mass.