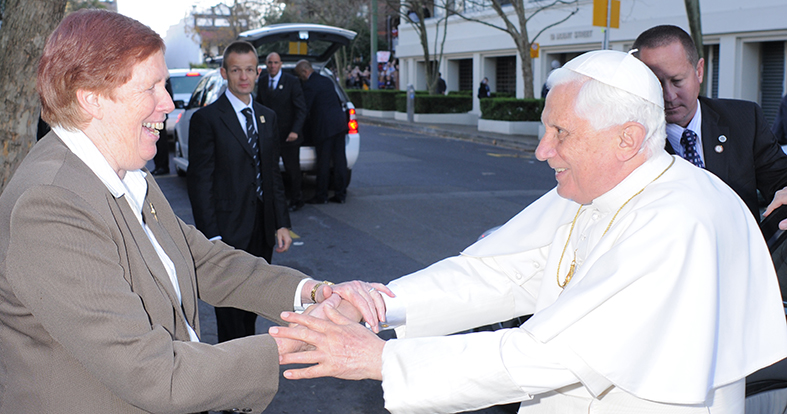 Catholic leaders have paid tribute to Sr Anne Derwin RSJ, the former congregational leader of the Sisters of Saint Joseph and president of Catholic Religious Australia, who died earlier this week.

Sr Anne died peacefully at the Mater Hospital in North Sydney on June 23. She was 69.Sr Monica Cavanagh RSJ, the current congregational leader of the Josephites, said: “Sr Anne’s contribution to the congregation she treasured, and to religious women and men across Australia through her presidency of Catholic Religious Australia, impacted in significant ways on the lives of many religious congregations and individuals.”

Br Peter Carroll FMS, the current president of CRA, said: “It is noteworthy that in the year of the canonisation of the first Australian saint, Mary of the Cross MacKillop, Anne Derwin, as leader of Mary MacKillop’s congregation, also took up the important leadership role as president of CRA.

“Sr Anne was a significant leader in the Church in so many ways – a woman of compassion, gifted in her capacity to bring people together, dedicated to the mission of God.

“Anne’s remarkable contribution, both to the religious women and men of Australia, as well as to the Church and the wider community, will remain an inspiration to the rest of us who follow in her footsteps.”

Sr Anne grew up in Beverly Hills, New South Wales, before she joined the Sisters of St Joseph 50 years ago and trained as a teacher of mathematics, science and religious education.

She spent six years as provincial of the New South Wales province of the Sisters of Saint Joseph and, at the end of her time in that role, moved on to the directorship of St Joseph’s Spirituality and Education Centre, Kincumber South. She then undertook the management of Mary MacKillop Place, North Sydney.

Sr Monica said in the time since Sr Anne’s term of office at CRA expired six years ago, she used her leadership skills and expertise as chair and member of several boards, and acted as facilitator for religious congregations.

“As her health declined and she became physically weaker, she maintained her passion and interest in public and current affairs,” Sr Monica said.

“Even up to her last days, she continued her commentary and reflections on local and world events and, as her illness progressed, her family, friends and religious sisters gathered around her to give her support and share in her wisdom.

“We continue to live in gratitude for her personal and leadership gifts, her organisational skills and her sense of prayer and the presence of her God in her life.”

Archbishop Mark Coleridge, president of the Australian Catholic Bishops Conference, said the bishops – currently in Rome for their Ad Limina Apostolorum visit – were saddened to hear of Sr Anne’s death.

“Sr Anne‘s contribution to her congregation, to Catholic Religious Australia and to the Church in Australia was immense,” Archbishop Coleridge said.

“With her dignity, strength and calm, she was a key figure in bringing the canonisation of St Mary MacKillop to completion. In so many ways, Sr Anne was a true daughter of the saint, one of the great Josephites. May she rest in peace and rise in glory.”

Sr Anne was remembered especially when the bishops celebrated Mass at St Paul Outside the Walls on June 26. It was at that basilica that many Australians gathered for Mass the day after St Mary MacKillop’s canonisation.