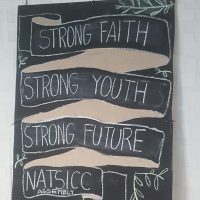 “NATSICC assemblies occupy an important space on the calendars of Aboriginal and Torres Strait Islander Catholics and this year we adopted the theme ‘Strong Faith – Strong Youth – Strong Future’,” he said.

Mr Arthur said the exploration of faith occurred throughout the week in designated “yarning circles”.

“Every speaker brought a unique aspect to proceedings. The traditional method of discussion facilitated authentic dialogue and resulted in the group developing a way forward for Australia’s First People in the Church,” he said.

“A common theme is that Indigenous and non-Indigenous Catholics have to work together for the better of the Church as a whole.”

Mr Arthur said the 2020 Plenary Council workshop, led by Plenary Council facilitator Lana Turvey-Collins, highlighted the commitment and yearning of Indigenous people to be included in the discussions.

“Their voices were strong and their faith deep,” Mr Arthur said.

Mr Arthur said the number of attendees was larger than expected with young people, elders and seven bishops exploring the deep connection of faith and culture.

“People agreed to work together and the group as a whole has galvanised and offers their gifts of family, culture and spirituality to the Church of Australia,” he said.

“One of the strong focuses for future work of the Church and community is to concentrate on the youth – they are the present and the future.

“The strength of our people and our youth was evident. We love our Church and we love our culture and the assembly was an opportunity to showcase both of those things.

Australia’s First People now constitute more than 130,000 of all Catholics in Australia, and numbers are increasing. Census data show that the growth of Aboriginal and Torres Strait Islander Catholics in the Church was approximately 7 per cent in the five years to 2016.