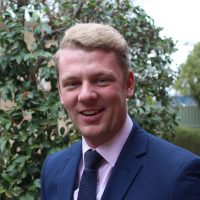 The Australian bishops have appointed a new executive secretary to support their engagement with Indigenous Catholics and their work in the critical areas of evangelisation, laity and ministry.

Christopher Ohlsen, who was the first lay person to hold the role of master of ceremonies for the Diocese of Parramatta, said he had always been interested in the workings of the Church and in serving at the national level.

“This position interested me in its ability to assist the bishops in setting national policy and to be of further service to the Church,” he said.

Mr Ohlsen’s calling to participate more fully in the Church began while studying for a forensic science degree, during which time he worked in his parish in Greystanes, NSW, as its liturgy co-ordinator.

After graduating, he continued to work at the parish while commencing full-time employment as a funeral director. In 2016, he accepted a role with the Diocese of Parramatta working on events and special projects.

“Not long after accepting this position, Bishop Vincent Long was installed as the fourth Bishop of Parramatta and I accepted the position as his executive assistant,” he said.

Mr Ohlsen played an important role during World Youth Day in Sydney, volunteering as a sacristan, helping visiting cardinals and bishops at the Sydney Opera House for the Days in the Diocese events.

He also had provided liturgical support for the opening Mass and the final Mass, held at Randwick Racecourse.

Mr Ohlsen, who started in the new role last week, said he hasn’t yet formulated any concrete goals.

“I hope for the time being I can simply listen to what people are saying and discern how we as a local Church can continue to be relevant not only to ‘people in the pews’, but also to those who are disenfranchised with us as a community,” he said.

“The NATSICC assembly was a great experience to meet and network with our Aboriginal and Torres Strait Islander Catholic brothers and sisters,” he said.

“The assembly’s theme ‘Strong Faith. Strong Youth. Strong Future’ really gives an insight to the current priorities of the NATSICC council and particularly their feedback that was provided during the assembly for the upcoming Plenary Council.

“I hope that this was just the first step for me continuing the dialogue with the community on their concerns and successes as they continue to be strong active members of our local Church.”

Mr Ohlsen said his work supporting the new Bishops Commission for Evangelisation, Laity & Ministry is exciting, with three important areas of Church life being brought together.

“I hope from this that there can be more collaboration across projects and the emergence of common goals, particularly amongst ordained and lay members of the Church,” he said.

“I hope that, through my work, others are enabled and encouraged to live out their baptismal call and be ministers of the Gospel to those both within and outside of the Church.”