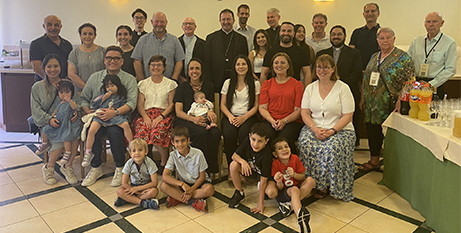 Australian delegates to the World Meeting of Families met with Australia’s Ambassador to the Holy See this week (Source: Twitter)

The Australian delegation to the World Meeting of Families in Rome has met with the Australian Ambassador to the Holy See, Chiara Porro, on the eve of the event.

Jude Hennessy from the Diocese of Wollongong, one of the Australian delegates, provided the following report on the meeting with Ms Porro at Domus Australia:

Ms Porro noted it had been some time since Australians had been able to travel freely to the eternal city because of the pandemic and thanked all of the delegates for coming to Rome to contribute to and be formed by the content of the World Meeting of Families.

She noted how at the heart of the Catholic faith were Catholic families, who in building up the family were nurturing young and old alike and strengthening society in many vital ways.

She said having the Abdallahs, a Sydney family who lost three children when they were hit by a car in 2020, as part of the Australian delegation and them having the opportunity to share their story with the Church and the world more broadly would send a powerful message of forgiveness.

Bishop Tarabay thanked the Ambassador for her words of encouragement and highlighted how the family truly is a vocation and path to holiness.

While there is no such thing as a perfect family, he said, it is in the midst of those imperfections that people learn to live with grace, with mercy and with forgiveness.

Bishop Tarabay concluded by noting that forgiveness is a medicine, but one we must give to others so that all can get well and be healed.

Find out more about the World Meeting of Families at: www.family.catholic.org.au